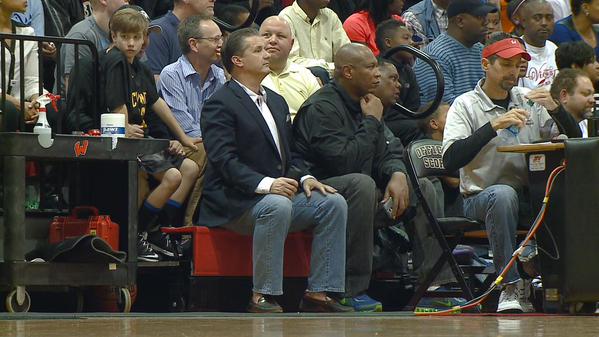 By JOHN PAVIA & ADAM ZAGORIA Kentucky head coach John Calipari and assistant Kenny Payne, along with Duke assistant Jon Scheyer, watched 2016 forward Harry Giles on Monday, sources confirmed to SNY.tv. InsideCarolina.com previously reported the development. The 6-foot-10 Giles is No. 1 player in the Class of 2016 by some media outlets like 247 Sports. Giles tore his ACL, MCL and meniscus while playing for the USA Under-16 team last summer and missed his sophomore season of high school basketball. He finally returned to the court this May after 11 months of rehab and recovery. Giles has shown some signs of rust which is natural when returning from an injury of that nature. “It’s been good,” Giles told SNY.tv in August when asked how his recovery was going. “I’ve just been going hard rehabbing and getting better every day.” Giles listed Duke, North Carolina, Kentucky, Syracuse, Kansas, Ohio State, UNLV and Texas as the schools recruiting him the hardest at that point. Giles has discussed possibly teaming up with two of the players also in the Class of 2016. “Jayson Tatum and I talk about that all the time,” Giles said. “I talk to Dennis Smith, too. We all talk about it all the time, but nothing is set in stone.” Photo: Micah Pearson Follow John Pavia on Twitter And Like ZAGS on Facebook