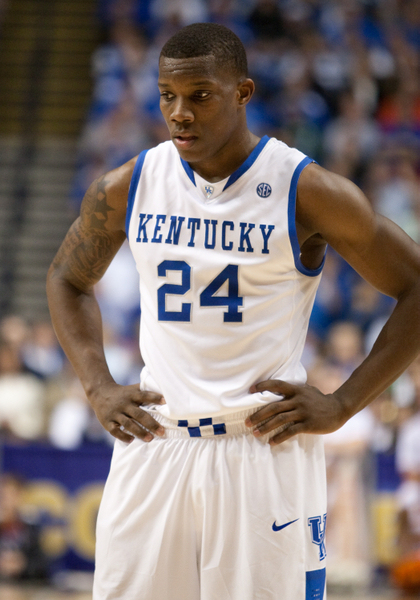 By JOSH NEWMAN The debate as to whether or not the University of Kentucky could defeat the lowly Philadelphia 76ers only intensified on Tuesday evening after the top-ranked Wildcats blew out fifth-ranked Kansas at the Champions Classic.  At least one ex-Kentucky star, Los Angeles Clippers guard Eric Bledsoe, is on board with the notion. “I’m definitely taking Kentucky,” Bledsoe told Brian Geltzeiler and Malik Rose Wednesday morning on SiriusXM Radio when asked who would in a 7-game series. “I think Philly would get probably, maybe one game. I know they’re (Sixers fans) gonna be mad, but I love my Wildcats. ” The Sixers are the NBA’s only winless team at 0-10 as they continue tanking towards what they hope is another high lottery pick in next June’s NBA Draft. Meanwhile, Kentucky, following a first-half scare against Buffalo on Sunday, looked every bit the juggernaut on Tuesday people think they are. Tuesday’s rout of the Jayhawks prompted Wildcats head coach John Calipari to go on Twitter early Wednesday morning in an effort calm Big Blue Nation down. “OK #BBN, don’t go nuts. Don’t think this is going to be a walk in the park. We played avg offense, good defense, but we’ve got a ways to go.” “I’ve got a job to do, day to day, week to week. Our team D and offense still needs work, and just as importantly, we need to click better.” “I repeat, do not lose your mind and start counting wins or championships. We are a long ways away.” Kentucky still has Providence, Texas, North Carolina, UCLA and Louisville on its non-conference schedule. Follow Josh Newman on Twitter

After 32-Point Loss to No. 1 Kentucky, Bill Self Jokes About Needing Vodka, Says Wildcats Could Go Undefeated