After 32-Point Loss to No. 1 Kentucky, Bill Self Jokes About Needing Vodka, Says Wildcats Could Go Undefeated | Zagsblog
Follow @adamzagoria

After 32-Point Loss to No. 1 Kentucky, Bill Self Jokes About Needing Vodka, Says Wildcats Could Go Undefeated 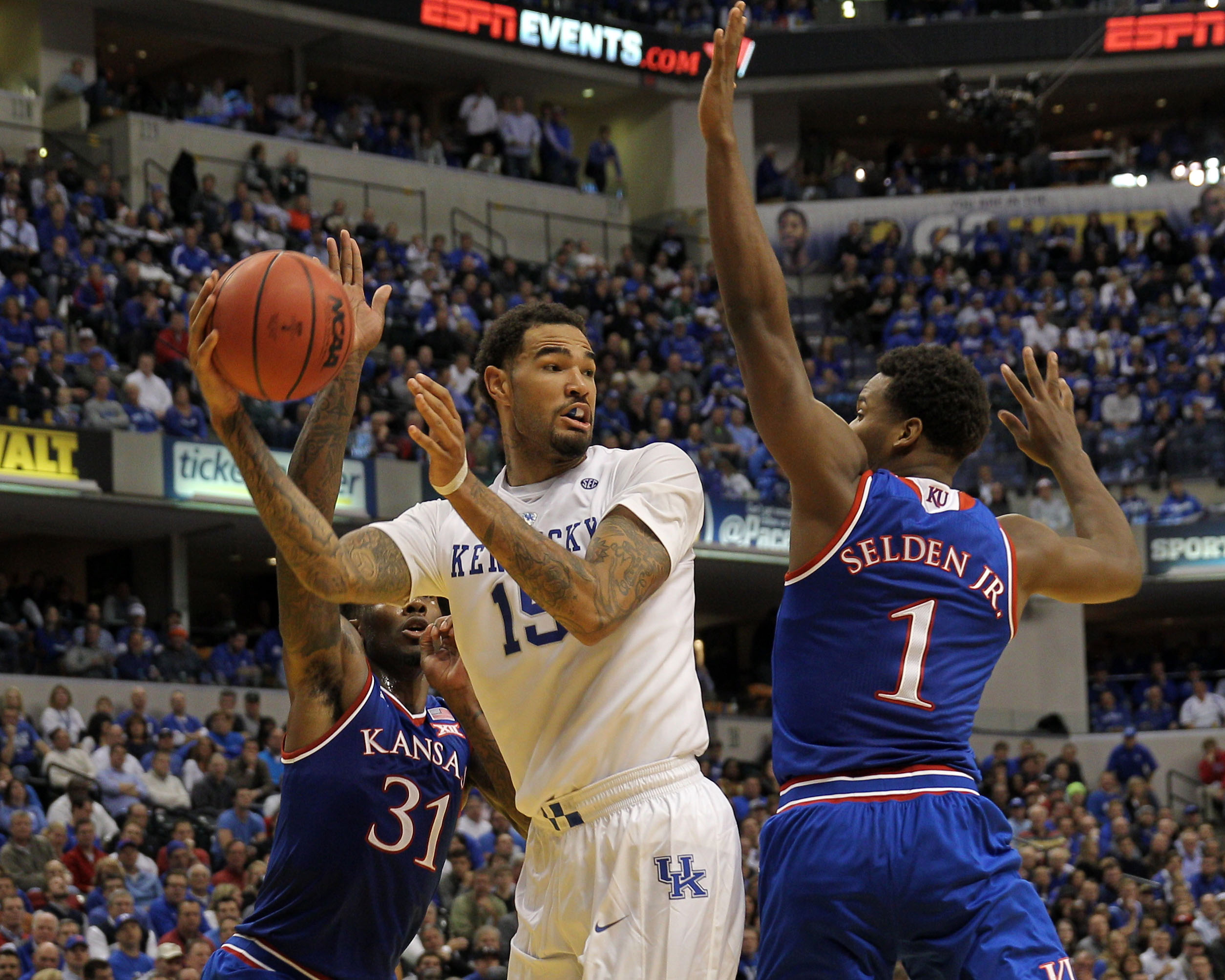 INDIANAPOLIS — After a 32-point loss at the hands of No. 1 Kentucky in the Champions Classic, Bill Self grabbed for a bottle of water at the post-game press conference and joked, “I was hoping that was vodka, but no it’s just water.” And really, who could blame the Kansas coach if he needed a good stiff drink after that result? Kentucky entered as a 6 1/2 point favorite and ended up winning, 72-40. Kentucky outscored Kansas 34-12 in the second half. The domination of the No. 5 team in the nation was so thorough, so complete, that Kentucky coach John Calipari played his walk-ons in the final minutes. “We’re not that good, next question,” Calipari said when he entered the media room, seemingly not needing a drink of vodka to feel good. “He’s gotta say that,” Self said when told what Calipari had said. “For this early in the season, though, they’re pretty good though.” 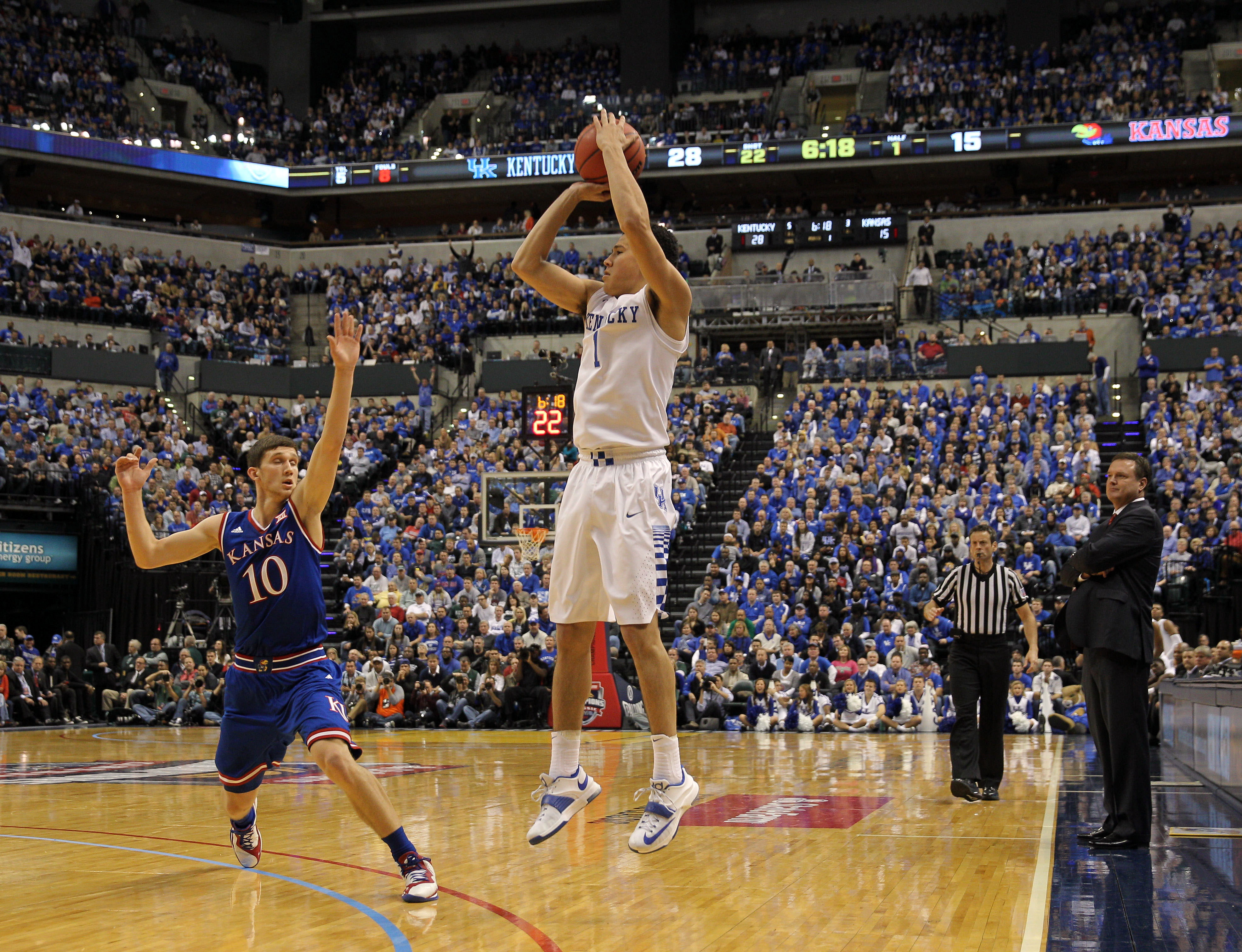 More than 60 NBA personnel were in attendance to watch this event, which featured 11 projected first-round picks, but none of them could have imagined Kentucky would dominate like this. Even with their nine McDonald’s All-Americans and five projected first-round picks. Kentucky’s dominance raises two related questions going forward. One, is everyone else in college basketball simply playing for second place this year? And two, can the Wildcats go 40-0? Or whatever-and-0 en route to perfection? “The battle is for the two spot,” one veteran NBA scout in attendance told SNY.tv. It’s early, sure, but things certainly appear that way right now. 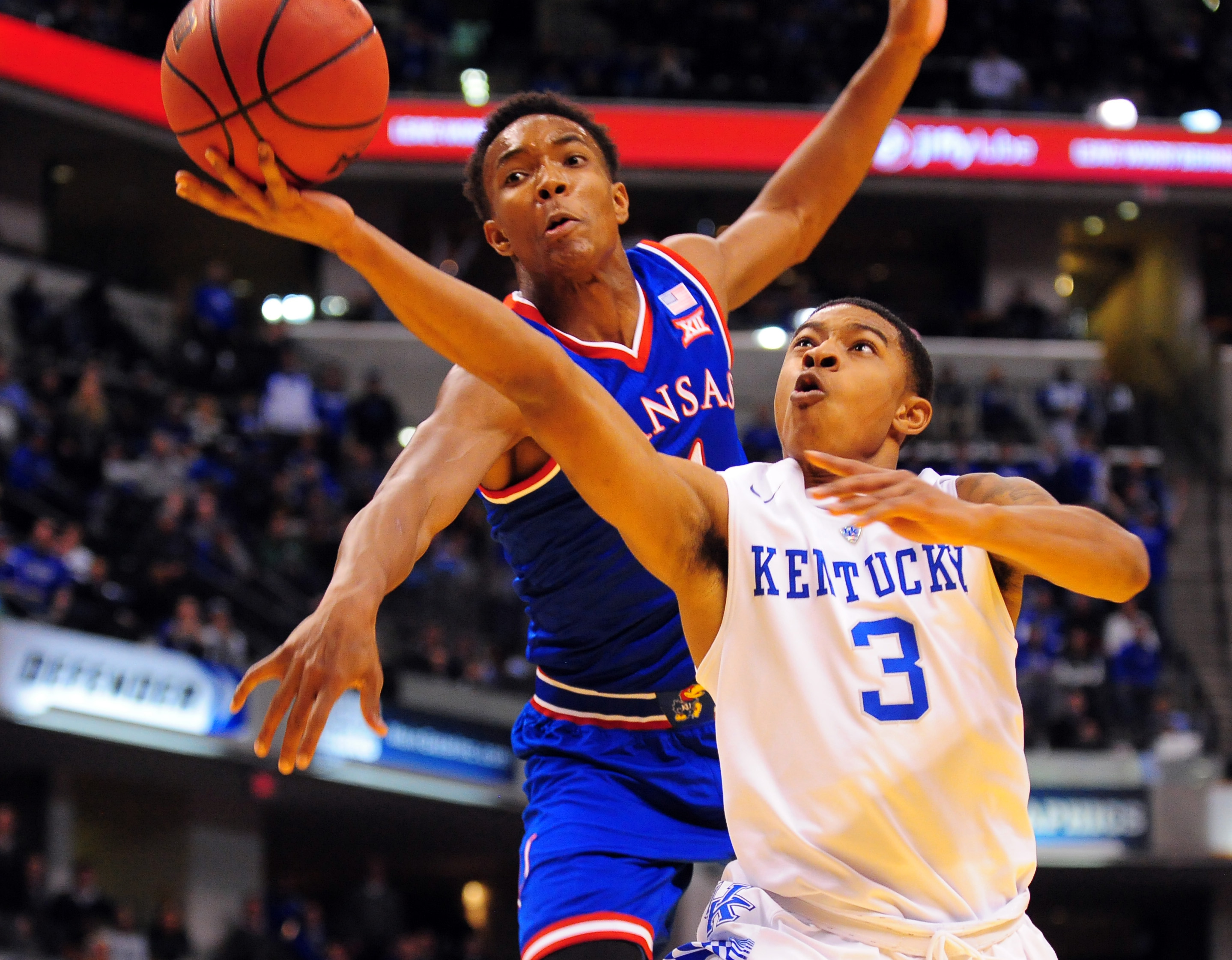 Kentucky still has Providence, Texas, North Carolina, UCLA and Louisville on the schedule before the calendar turns to 2015, so there’s a lot of basketball left to play. But what happens when Kentucky gets to the SEC, where Florida was the only other Top 25 before it lost to Miami this week. “Wichita State did it last year,” Self said when asked if it was crazy to think that Kentucky could go unbeaten. “If by February they’re still undefeated, that could be something that could happen.” Self was asked several times what it would take for somebody to beat Kentucky, to handle their massive assemblage of height and length — Kentucky has four guys over 6-10 — that led to 11 blocks against 11 made Kansas field goals. Self speculated that “playing four corners, spread the floor, drive or pass at the end of the clock” might be a way to go. “Rhode Island went to the Elite 8 playing like that,” he said. He added that somewhere, someday this season, somebody would catch Kentucky. 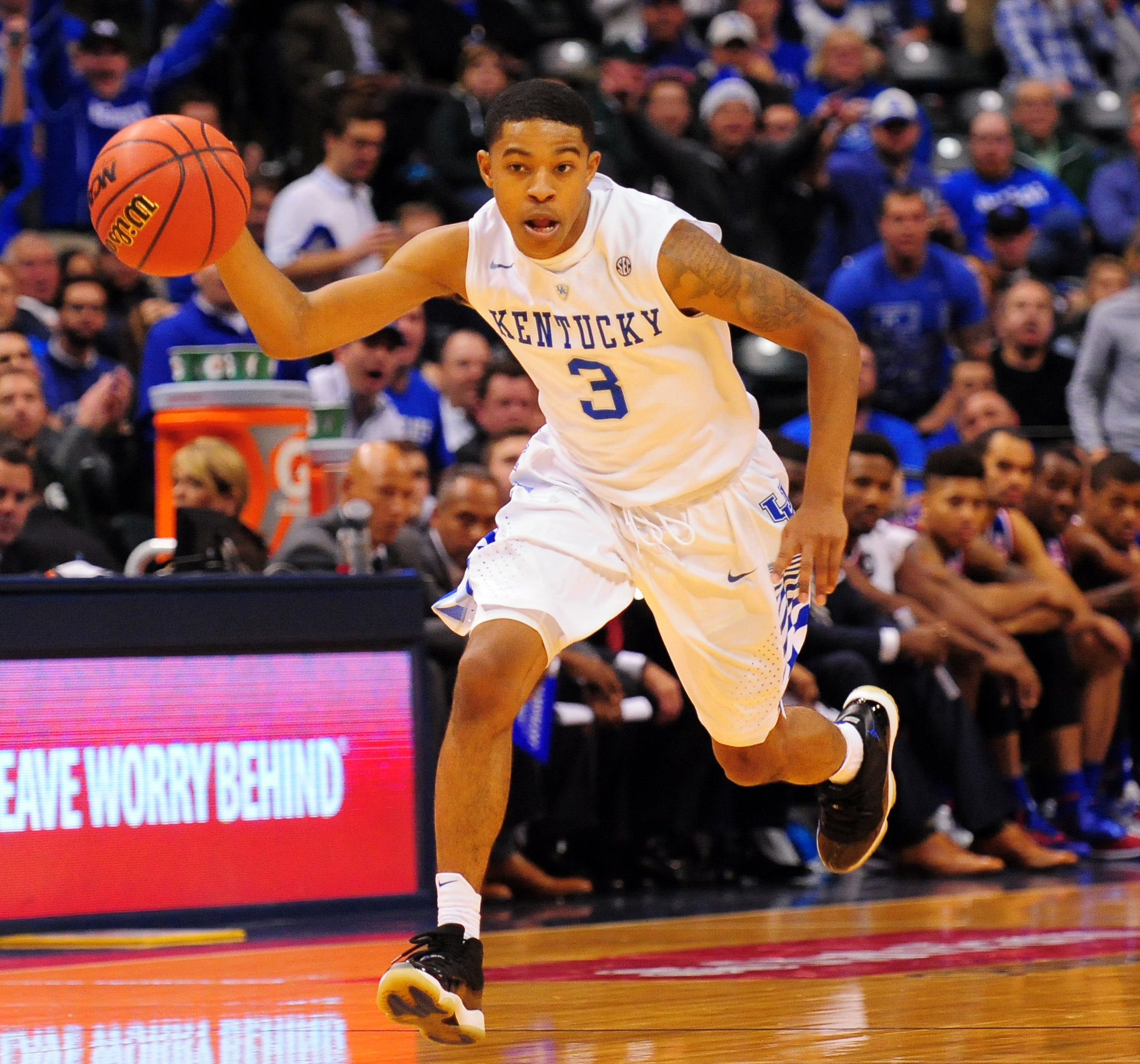 “There’s so much ahead and teams have a tendency to get better, too,” Self said. “There will be teams out there that can challenge them. Whether they can beat them, I don’t know.” What if that one game Kentucky loses comes in the NCAA Tournament? Wichita State can tell you all about that. “The question will be can they win the NCAA Tournament,” one high-major D-1 assistant told SNY.tv. “One bad night and it’s over. That’s what makes college basketball so great.” The scary thing for Kentucky’s opponents, of course, is that they will get better, too. “This becomes a base for us to grow,” Calipari said in words that should strike fear into a lot of opponents. “We’ve got so much to figure out about this team it’s not funny,” he added. Calipari said his team needs to work on its offense, especially against the zone. But certainly on defense, they are going to dominate many teams with their length and height. The only stumbling block for Kentucky might be themselves. 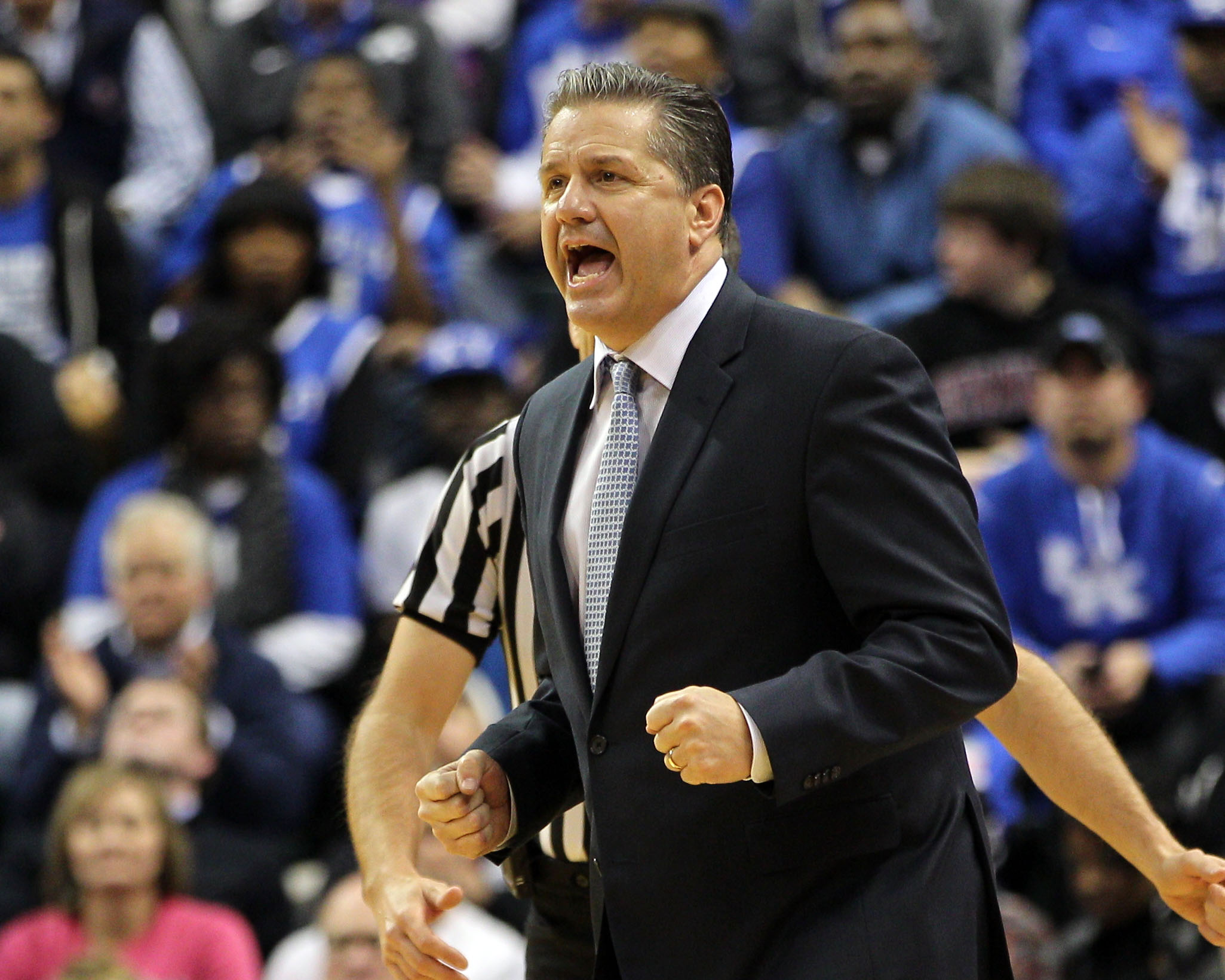 After all, Calipari is wedded to playing 10 guys equal minutes and he must try to keep all these future NBA guys happy doing so. Ten players scored in the first half of this game. “Will I ever go to playing eight guys or seven?” Calipari said. “I hope not because I want to be fair to all these kids. This is what’s right for these 10 players, and really 12 players. If we lose some games early playing this way, then we lose some games early.” Winning, of course, keeps people happy, and for now the platoon system is working just fine as Kentucky is 3-0 on the young season. “We trust in what coach is telling us,” Willie Cauley-Stein said. “And we trust in each other. And if you’re winning and everybody’s got the same stats kind of, everybody’s on the board on some stat-line, everybody’s going to be happy. It’s that simple.” And if it’s really that simple, Kentucky is going to send a lot of opposing coaches reaching for the vodka. Photos: US Presswire