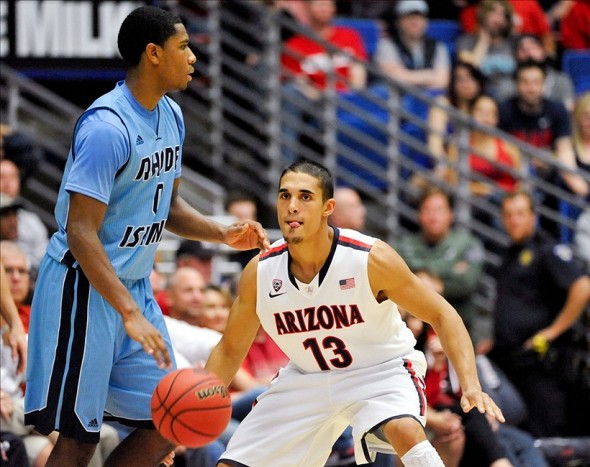 Rhode Island sophomore guard E.C. Matthews was left off the Atlantic 10’s Preseason First Team even though he was named the league’s Co-Rookie of the Year last season. In the end, that may make the league’s coaches look a little silly. After all, the 6-foot-5 native of Detroit averaged 14.3 points and 4.3 rebounds last season, posted nine games with 20 or more points – most among all freshmen nationally — and is already on the radar of NBA personnel. “He’s got an opportunity if he keeps progressing to be an NBA player at some point,” Rhody coach Dan Hurley told SNY.tv. DraftExpress.com currently has Matthews going at No. 24 in the 2016 NBA Draft. “He played well at Adidas Nations and definitely increased his stock and raised his profile,” Jonathan Givony of DraftExpress.com told SNY.tv. “People will be watching him closely this year to see how he follows up on his very strong freshman season.” Matthews excelled at the Adidas Nations event in August in Garden Grove, CA. “They said if I wasn’t the best guard there I was like one of them, so just receiving that type of information from all them it opened my eyes and gave me a whole lot of confidence,” Matthews told SNY.tv. Asked how he felt about the NBA chatter, Matthews added: “It’s a blessing but I don’t try to get ahead of myself. I take it day by day. [The NBA] is a goal that I want to fulfill eventually but it’s not going anywhere, so I try not to think about it and just keep working on being the best college player I can be right now.” A natural shooting guard, Matthews initially chose the Rams over Minnesota, Iowa, Marquettte, Providence, Missouri, UConn, Xavier and Dayton in the fall of 2012 in what was a big recruiting coup for Hurley. Now he is working on developing his point guard skills for what lies ahead. “I’ll be running the one a lot more because that’s something that I’m being looked at [for] at the next level,” Matthews said. “My strength right now is definitely scoring in a whole lot of ways but I’m trying to be more of a playmaker right now.” The Rams were picked No. 6 in the A-10 poll, but Matthews and his teammates are looking to surprise some teams ahead of them. “We have a lot of talent this year,” he said. “We’re going to let the chips fall where they may and I’m excited.”