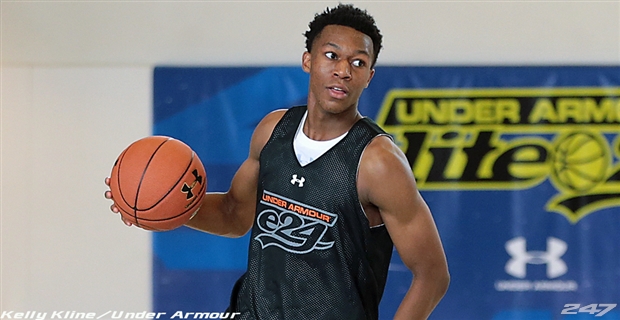 Kentucky head coach John Calipari watched 2016 combo guard Tyus Battle on Friday, while Kansas assistant Jerrance Howard saw 2015 point guard Malik Newman. Calipari was making his second visit to Gladstone (N.J.) Gill St. Bernard’s this fall to see Battle, head coach Mergin Sina confirmed to SNY.tv. Battle visited Kentucky earlier this month for Big Blue Madness and enjoyed it. “It went very well,” Gary Battle, the player’s father who did not make the trip with Tyus, told SNY.tv. “Tyus said Big Blue Madness was awesome and Cal and coach [John] Robic were very excited about him and how he may fit if he attends the school in a few years. Ty stated that he could see how Coach Cal gets some of the best talent year after year. It was a great event.” Battle is being recruited by virtually every major program in the country, and plans to cut his list by December. Kentucky, Duke, Syracuse, Louisville, UConn, Michigan, Ohio State and Florida are among those in the mix.  Meantime, Kansas’ Howard visited Newman, the No. 1 point guard in the Class of 2015, at Calloway (MS) High School. Newman has recently visited Kentucky and Ole Miss, calling the Kentucky trip in which he saw Drake “crazy.” Newman is expected to visit Kansas at some point this season. Newman averaged 24.1 points and 5.1 rebounds per game on the EYBL circuit for the Jackson Tigers. Newman also averaged 29.2 points per game for Callaway (MS) in his junior season.