LaGerald Vick to SMU, Will Reclass to 2016 | Zagsblog
Follow @adamzagoria

LaGerald Vick to SMU, Will Reclass to 2016 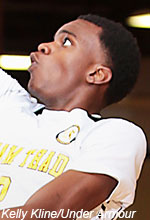 By JACK LeGWIN LaGerald Vick has committed to SMU. Ranked in the Top 150 in the nation by multiple outlets, Vick also announced that he will reclassify to the Class of 2016. At 6-foot-5, Vick has a knack for putting the ball in the hoop at a high rate, which he showed consistently for Team Thad over the summer. Last year, Vick helped to lead Douglass (TN) to a 22-5 record.  Vick chose SMU over Georgia Tech, Ole’ Miss, Alabama, Arkansas, Tennessee, Providence, Memphis, Florida State, Cincy, and Western Kentucky. Vick is the first recruit for the Mustangs in the class of 2016. Reggie Rankin of ESPN was the first to report the news. Follow Jack on Twitter