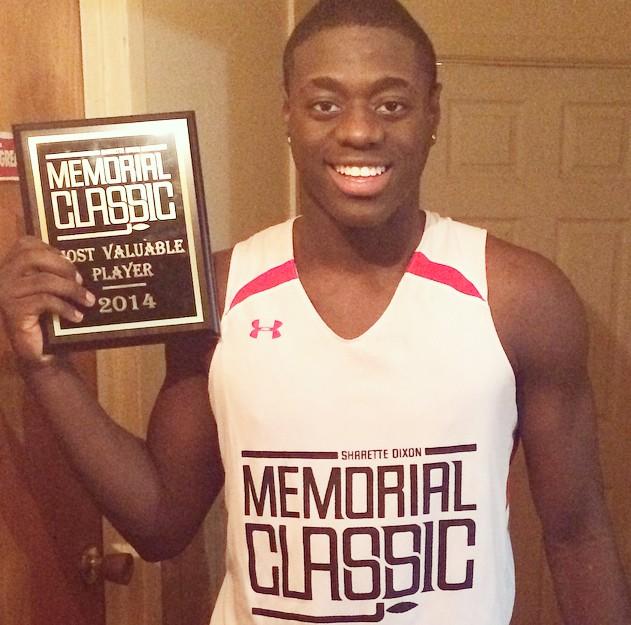 NEW YORK — Anyone hoping to see an Isaiah Briscoe-Rawle Alkins showdown in the Sharette Dixon Classic Saturday night was disappointed because Briscoe is on his official visit to Missouri. But Alkins tried to make up for it by putting on a show of his own. The 6-foot-5 2016 Christ the King guard went off for 34 points en route to MVP honors as the New York upperclassmen topped their counterparts from New Jersey, 103-93, at the Gauchos Gym. The most impressive two points of Alkins’ night came on a fourth-quarter play that went slightly awry. He threw an alley-oop pass to a teammate from the top of the key, but the pass was too high and caromed off the top of the window. Alkins, who resembles a young Lance Stephenson, alertly followed the basketball, grabbed the rebound and dunked it home for an emphatic two points. “Oh man,” Alkins said with a laugh. “I saw my teammate open, tried to throw him an alley, he ended up not catching it, it hit the backboard and I just hustled and finished hard.” Alkins is set to visit Providence or N.C. State next weekend for Midnight Madness, and will then trip to Villanova (Oct. 24) and Indiana (Oct. 25). He says he feels supremely confident in his skills right now. “My confidence is head high, man,” he said. “I feel like I’m the best player everywhere I play, every time on the court, no matter who it is. It could be LeBron James, it could be Kobe Bryant, Michael Jordan, I still have that confidence that I’m the best player in the world, man.”   DESURE BUIE CUTS LIST (UPDATED)

Desure Buie, a 6-foot, 145-pound point guard from Wings Academy in New York, is down to Hofstra and Manhattan after a source told SNY.tv that Seton Hall is no longer involved. He visited Hofstra Saturday. “I watched them practice, very competitive, high intensity,” Buie said. He also plans to visit Manhattan on Monday and has previously visited Seton Hall. “They are the ones chasing me the hardest,” Buie said. “I have no time [frame] yet, this is the hardest decision of my life.” Wherever he lands, Buie believes he can help run the team from the point. “I’m a floor general, I get everybody involved, I can score when it’s needed,” Buie said.   AIKEN ADDS ILLINOIS OFFER, PLANS MARYLAND VISIT

Bryce Aiken, a 5-10 2016 point guard from The Patrick School who played for the Jersey upperclassmen, has picked up an Illinois offer and also plans to visit Maryland and Villanova for their Midnight Madness events Aiken said Illinois assistant Dustin Ford called him this week and plans to come visit next week because they need a 2016 floor general. “It’s just a big honor coming from another high-major school after a good summer, so obviously hard work is paying off and I’m just going to keep working, keep working,” Aiken said of the Illinois offer. Aiken will also visit Maryland on Friday. “Just the whole atmosphere and the way they run things down there, it’s definitely a well-run program and they take basketball very seriously and that’s what I’m looking forward to when I make the decision to go to school,” he said. Aiken was at Seton Hall for the Midnight Madness last week and is close with freshman forward Angel Delgado. “Angel is one of my best friends, he came through St. Pat’s last year and taught me a lot,” Aiken said. Missouri also plans to visit Aiken soon, he said.   DUVAL, TUCKER TO VISIT SYRACUSE; PIERRE-LOUIS TO VISIT UCONN

Trevon Duval, a 2017 point guard from St. Benedict’s Prep, scored 13 points as the New Jersey underclassmen beat their New York rivals, 86-75. “It was fun playing against them, we got kind of a rivalry,” Duval said. “It was just fun beating them.’ Jamir Harris of The Patrick School went for 21 points en route to MVP honors in the win and Leondre Washington of Teaneck had 16. Sidney Wilson of St. Raymond’s and Jose Alvarado of Christ the King, who holds an Iona offer, each had 16 in the loss. Wilson was named the New York MVP. Both the 6-3 Duval and 6-7 Jordan Tucker of Archbishop Stepinac will trip to Syracuse on Friday for Orange Madness. “Just to have fun at their Midnight Madness and just chill up there,” Duval said. “I could see myself fitting in there the way they play. They have big guards, tall guards, so I could see myself fitting in there. Tucker, who recently added UConn and Syracuse offers, is also looking forward to it. “I want to see the campus, I want to see the atmosphere. They always say 35,000 people [at the Carrier Dome] so I’m going to see,” Tucker said, adding that he could imagine himself at Syracuse. “When I watch them, I can see myself in their system,” he said. “As being a scorer and a long defender in the 2-3 zone that they have. ” Nate Pierre-Louis, a 6-2 point guard from St. Benedict’s, will visit UConn unofficially next weekend. “Really looking forward to it,” he said.   TYREE ADDS GEORGIA TECH, CREIGHTON OFFERS

Breein Tyree, a 6-2 2016 point guard from St. Joe’s-Metuchen added offers from Georgia Tech and Creighton and has interest from Villanova. He said he also holds offers or interest from USC, Virginia Tech, Virginia and others. Tyree also plays quarterback and wide receiver on the St. Joe’s football team, but plans to play college basketball.   FREE THROWS Tyreek Chambers, a 2018 guard from Christ the King, holds offers from Providence and Cincinnati, according to head coach Joe Arbitello.

Tony Delk's Message to the Kentucky Players: Sacrifice to Succeed