Coach K Amps Up Pressure on Okafor, Duke With Comments 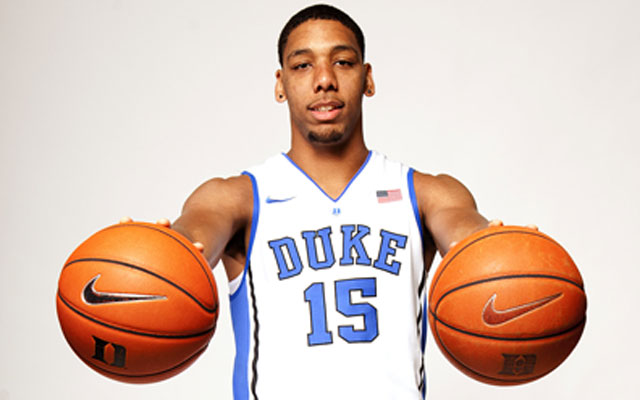 If Jahlil Okafor ends up leading Duke to a Final Four or an NCAA championship in his freshman season, we may all look back at Coach K’s comments on the young man from Chicago as prophetic. But in the meantime, the Duke coach has just amped up the pressure on the 6-foot-10 Okafor, and placed a giant bullseye right on his No. 15 jersey. “With Jah, you’ll see,” Krzyzewski told Gary Parrish of CBS Sports.com, which named Okafor their Preseason National Player of the Year. “He’s good. And he’s been accepted pretty much right away [by his teammates] … because there’s nobody like him. There’s no comp.” No comp? Really? Okafor’s a great kid and great talent to be sure. He is projected as the No. 1 pick in next June’s NBA Draft, but no comp? How about Karl-Anthony Towns from Kentucky? How about Cliff Alexander from Kansas? How about Myles Turner from Texas? “It’s all premature, no one’s played a game yet,” one veteran NBA scout told SNY.tv. “So he’s able to score on [Marshall] Plumlee, that’s what we’re led to believe? Well, that’s great. “He’ll get tested. He’ll get Kentucky and them and we’ll find out. But it’s just early propaganda. Coach K has gone out of his way to promote Jabari Parker, it’s all about him having the No. 1 pick. It’s about him taking Cal on in recruiting. He can’t get all the players because Cal gets them all, so he’s just going to promote that I get the best one. That’s just all posturing, that’s all that is. Everybody has him as the No. 1 or No. 2 pick so he’s not really going out on a limb.” The scout added: “He’s more refined than a lot of the picks. He’s more refined than Towns because Towns is raw. He’s more refined than [Willie] Cauley-Stein because Cauley-Stein is raw. Same with Myles Turner and Cliff Alexander. That’s the one thing that Okafor has, he’s got an offensive game.” The scout compared Okafor to Jared Sullinger of the Boston Celtics, who has turned into a solid, but not dominant pro. “Sullinger had a great college career, too, and he had a lot of similarities so we’ll see,” he said. “I like the kid but I don’t understand the posturing of all these guys.” Duke assistant Jeff Capel told Parrish that Okafor is “dominant.” “He’s dominating who? I hope so,” the scout said. “I hope he’s dominating Marshall Plumlee.” The other thing to keep in mind here, as I wrote in this earlier column, is that Coach K is 2-3 in the NCAA Tournament with one-and-done players, including last year’s first-round exit to Mercer with Parker leading the way. That’s not to say that Okafor, Tyus Jones and Justise Winslow won’t break that trend. They could well end up leading Duke to a Final Four and, who knows, maybe even the national title. But so far, Coach K hasn’t proven he can go deep in March with one-and-dones…and now he has potentially three of them. For now, Coach K just upped the ante a little bit by proclaiming to all the basketball world that there’s “no comp” for Okafor. Photo: Duke Athletics