Despite her struggles in the three previous 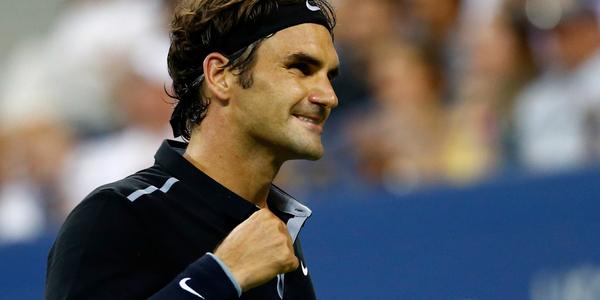 NEW YORK — Roger Federer was staring at double-match point in the fourth set against a red-hot Gael Monfils in the U.S. Open quarterfinals and stood on the brink of being ousted from the tournament he has won five times.

The lubricated Arthur Ashe Stadium crowd was in full support of Federer’s potential comeback against the Frenchman after he had dropped the first two sets, but here he stood, on the edge of defeat at the hands of a man John McEnroe called “probably the greatest athlete in the history of our sport.”

But Federer dug deep into his steely reserves and hit a swinging forehand volley to save one match point on his serve and then hit a forehand winner from the baseline on the second.

Antonio Blakeney Commits to Louisville and Donovan Mitchell Loves It

Five-star shooting guard Antonio Blakeney committed to Louisville on Thursday night as Rick Pitino grabs another high-level guard from the Class of 2015; Reggie Rankin of ESPN had the story first.

Blakeney, a 6-4 guard from Oak Ridge High School (FL) with tremendous scoring ability, joins Donovan Mitchell from the 2015 class in a loaded Cardinals backcourt that is typical of the Louisville teams we’ve seen in recent years under Pitino.

When asked about Blakeney’s commitment to Louisville, Mitchell told SNY.tv, “Best thing that could’ve happened. We are going to do big things at the Ville. I can’t wait to play with him. Me at the 1 and him at the 2, its gonna be incredible.”

Jawun Evans, arguably the top point guard in the Class of 2015, enjoyed his visit to USC last weekend and now heads to Illinois this coming weekend.

“It went pretty good,” the 6-foot point guard out of Dallas (TX) Kimball  told SNY.tv of USC. “It was a great campus. Me and the coaches got along very well. They’re really young and down to Earth people. They really tell you what’s going on.”

Asked what coach Andy Enfield said his role there would be, Evans said, “Just come in and do the things I’ve been doing. Really play my game when I come in.” Jean Marc Christ Koumadje, the 7-foot-4 giant whose journey from his native Chad to Senegal to America was documented here this summer, is set for an official visit to Florida State this weekend.

“He respects coach [Leonard] Hamilton and Hamilton believed in him after seeing him play one time,” Koumadje’s mentor, Sulieman Holman, told SNY.tv Thursday.

On Thursday, their hard work paid off when the 6-foot-1, 180-pound Sanders committed to the Scarlet Knights for the Class of 2015.

“I don’t want to go somewhere where I would have to wait,” he told Jerry Carino of Gannett New Jersey. “I wanted to come to a place where I could work hard and be the guy right away.”

“I’m not only playing in the Big Ten, but with a coach who just coached in the NBA,” he told Carino. “He said I kind of remind him of himself as a player, how I play hard defense and control the team. He played in the NBA, so he knows what it takes. Coach Jordan is going to take good care of me.”

Said Showtime Ballers coach Diana Neal on Thursday: “They were the only school that offered and recruited him the hardest. They are more like a family to him. He also will play right away because they need a point guard. He loked at where he could be a pro as well and felt Eddie Jordan can help him follow his dream. They have been really great and have showed they need him more than just want him. He loved the school as well.”

The last 48 hours of Kei Nishikori’s