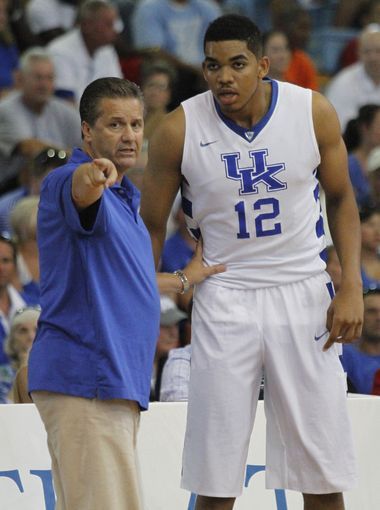 Jonathan Givony and his colleagues at DraftExpress.com are busily cranking out videos and scouting reports on prospects for the 2015 NBA Draft. As we look ahead to the upcoming college basketball season, and to next June’s draft, a couple of things stand out. First, Kentucky, as we all know, is just loaded. Givony produced videos on 10 SEC players “considered serious first-round prospects in our view,” and seven of them are from Kentucky: Karl-Anthony Towns, Willie Cauley-Stein, Dakari Johnson, Andrew and Aaron Harrison, Alex Poythress and Marcus Lee. The three other SEC players? Florida’s Chris Walker, Arkansas’ Bobby Portis and LSU’s Jarell Martin.  “It says more about the overall strength of Kentucky,” Givony told SNY.tv. “We did videos on 10 guys but seven of them are on Kentucky.” So of course it makes perfect sense that Kentucky coach John Calipari is holding his own groundbreaking NBA Combine next month to showcase his nine McDonald’s All-Americans. “Everybody’s going there to see Towns,” one veteran NBA scout previously told SNY.tv about the New Jersey native. “They can tell you they’re going to see the other guys, but they’re going there to see Towns because everybody looks at big guys first and they [also] want to see Willie Cauley-Stein and see how he’s playing.” By contrast, the ACC has five first-round prospects (with videos), the Pac-12 and Big 12 have four apiece, the Big 10 has three, the American Athletic Conference has one and the Big East has none. Zero. Nada. Givony has yet to reveal his ACC videos, but his 2015 Mock Draft includes three Duke freshman in the first round — including No. 1 overall pick Jahlil Okafor, No. 8 Justise Winslow and No. 14 Tyus Jones — along with Louisville’s Montrezl Harrell at No. 12 and North Carolina’s Brice Johnson at No. 27. In the Pac-12, Givony produced videos on No. 9 Stanley Johnson of Arizona, No. 15 Rondae Hollis-Jefferson of Arizona, No. 26 Normal Powell of UCLA and No. 30 Jabari Bird of Cal. In the Big 12, the site has videos on No. 4 Kelly Oubre and No. 5 Cliff Alexander, both of Kansas, No. 17 Myles Turner of Texas and No. 24 Wayne Selden of Kansas. In the Big Ten, Givony has yet to reveal his videos, but his Mock includes No. 11 Sam Dekker of Wisconsin, No. 18 Caris LeVert of Michigan and No. 23 Frank Kaminsky of Wisconsin. In the American, UConn’s Amidah Brimah was the only player who merited a scouting video, and he’s not listed in his 2015 Mock. The Big East didn’t merit a single scouting video on any player. “The Big East has zero,” Givony said.