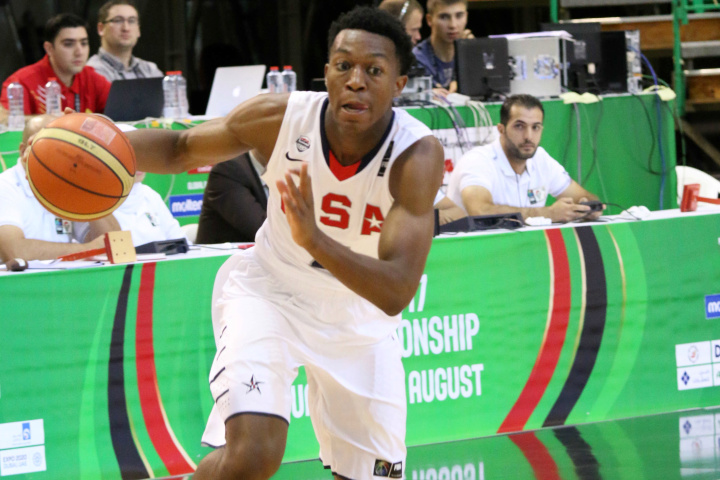 Duke head coach Mike Krzyzewski and assistants Jeff Capel and Jon Scheyer had a “very impressive” presentation Wednesday for 2016 guard Tyus Battle at Gill St. Bernard’s, Gill coach Mergin Sina told SNY.tv. “You get a guy like that coming into Gill, obviously he’s a legendary coach,” Sina said. “He was really good. He knew Tyus to a ‘T,’ which always helps. He had a good evaluation of Tyus. He explained all the things that he could work on to get better, and some of the things that are going to make him successful.” Sina added: “They like him as a multi-purpose player, which I agree with. I think he can play two to three positions, two very well I think and the third one [point guard] he’d have to work on. The point guard is the one he has to work on, the two is more of a natural position for him. He can get a rebound and go with and handle the ball in transition. The elite guys all say the same thing about Tyus, that he is versatile. That’s something that will help him.” A Who’s Who of big-time Division 1 coaches has been through the school in the past two weeks to pitch the 6-foot-6 Battle, who turned 17 Tuesday. Arizona assistant Book Richardson, Kentucky’s John Calipari, Virginia’s Tony Bennett, UConn’s Kevin Ollie, Miami’s Jim Larranaga, Louisville’s Rick Pitino, Villanova’s Jay Wright, Rutgers’ Eddie Jordan, Michigan’s John Beilein, Ohio State’s Thad Matta and Florida’s Billy Donovan have also made their pitches to Battle. Syracuse coach Jim Boeheim, who assisted Coach K on the gold-medal winning World Championship team, is due in Friday with some of his staff. As for Duke, Battle is slated to visit the school next month. He will also visit Kentucky for Midnight Madness. Sina, who previously called Duke a “home run” academically, added that it is an attractive option in terms of life beyond college. “Obviously, it’s important to Tyus and his family. If you have a chance to go to a Duke and that’s the school you choose, it’s never a wrong decision,” Sina said. “No matter what happens with basketball, that’s a degree that you can hold in your hand and be very proud of it.”