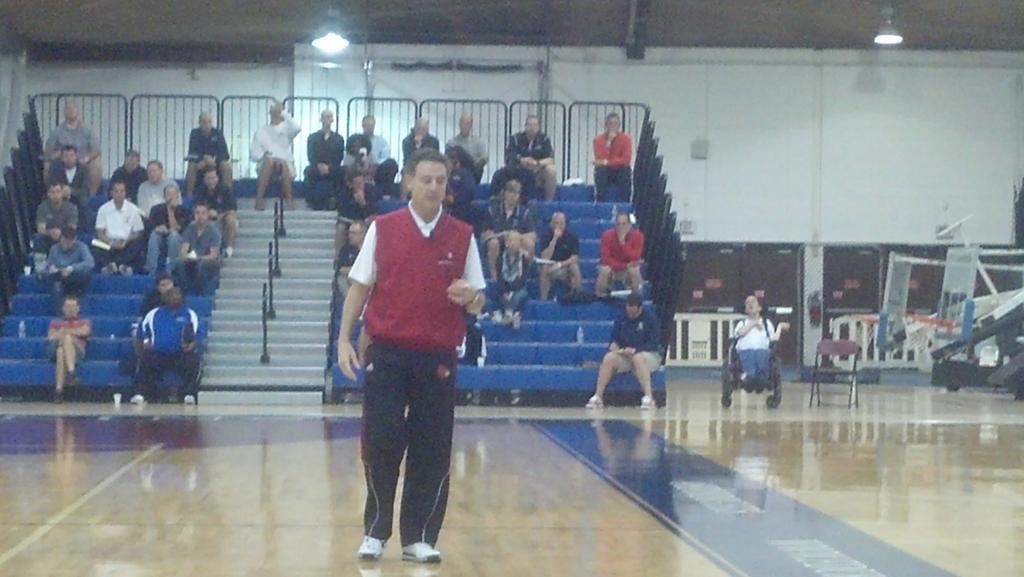 HACKENSACK, N.J. — Louisville coach Rick Pitino highlighted an array of college and pro coaches at the Brayden Carr Foundation clinic at Fairleigh Dickinson University on Friday, and Pitino later defended Coach K against charges that he holds a recruiting advantage as coach of Team USA. “Obviously, I think it’s a great cause,” Pitino told SNY.tv of the event, founded by Rhode Island assistant coach Jimmy Carr and his wife Natalie after their 2-year-old son Brayden died in 2011. “Richard [Pitino] lost a brother and we lost a child, so we know the heartbreak that goes with that, and obviously being part of something for the great cause, besides representing coaches, is a terrific thing.” Pitino was featured at the event alongside Iowa State coach Fred Hoiberg, South Carolina coach Frank Martin, Villanova coach Jay Wright, Notre Dame coach Mike Brey and former NBA coach George Karl. “I love listening, talking basketball, I love being around high school coaches, and when you combine that with Jimmy, it’s a layup,” Martin said hours before he picked up a local commitment when 6-foot-9 power forward Chris Silva of Roselle Catholic committed to the Gamecocks. “It’s what it’s all about.” Pitino used the platform to defend Duke coach Mike Krzyzewski, who has come under attack for allegedly gaining a recruiting advantage as the coach of Team USA. “I don’t know that he does or he doesn’t, I really don’t, but if he does, he deserves it,” Pitino told SNY.tv after his clinic. “He’s earned it because of all the time spent coaching these guys. He’s coaching pros, he’s not coaching college guys. Billy [Donovan] and Jay [Wright] and those guys are coaching the younger guys, so I don’t know what advantage he has, if he does or doesn’t. If he does, I think he’s earned it. I don’t think it matters. It’s like when people used to say, I used to work the Five Star Camp, they said I had an advantage. I went there as a camper, I worked there as a counselor for 15 years, so I probably did have an advantage, but I earned that advantage.” It seems that all of Coach K’s high-profile colleagues are closing ranks publicly to defend him, as both Syracuse coach Jim Boeheim, an assistant on Team USA, and Kentucky coach John Calipari, whom Boeheim said privately complained about Coach K’s extra access, have publicly defended Coach K. Meantime, Pitino will join Coach K and Boeheim beginning this season when Louisville joins the ACC. “I’m looking forward to it because there’s a lot of places in my 40 years, I haven’t been,” Pitino said. “I haven’t been to Florida State, haven’t been to Virginia, haven’t been to Cameron, so I’m looking forward to it. The Big East was special to me, but this is the next big thing.” The ACC now has seven former Big East schools in Louisville, Syracuse, Pittsburgh, Notre Dame, Miami, Virginia Tech and Boston College, but Pitino said the league must prove it’s the equal of the old Big East. “You know, we have to prove that first by getting, like the Big East did, nine teams in the NCAA,” he said. “Once we do that, then we can say that that’s true.” Actually, the  Big East put 11 teams in the Big Dance in 2011, a feat that seems unlikely to be matched anytime soon.

Briscoe: Kentucky Recruitment Is Something 'I Dreamed Of'