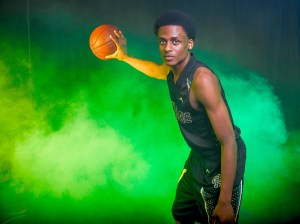 By JACK LeGWIN Antonio Blakeney has pulled his verbal commitment to Louisville and reopened his recruitment. “I am still really considering louisville heavily I like everything about [their] program , coaches and fans!!” Tweeted Blakeney, who committed earlier this month on his visit. “I made a quick and emotional decision based on some of the wrong reasons,” Blakeney told Reggie Rankin from ESPN. “I really loved my visit and everything about Louisville and I am still strongly considering them.” The 6-foot-4 Blakeney has no visits planned, his AAU coach Steve Reese told SNY.tv Tuesday morning. “We haven’t heard from any schools yet since he committed a few weeks back,” Reese said. Blakeney initially cut his list to seven schools: Florida State, Louisville, Mizzou, Kentucky, Oregon, LSU and USC before he committed. “I will see where things are at with the other schools because I have not talked with any one since I committed,” Blakeney told Rankin. “I will release a list of schools in a few days.” Blakeney, ranked No. 16 in the Class of 2015, is one of the best pure scorers in the nation. He can get to the rim, has a deadly midrange game and an ability to drill the long ball. He can score at all three levels on the floor. Follow Jack on Twitter

Coach K Must Figure Out the One-and-Done Thing