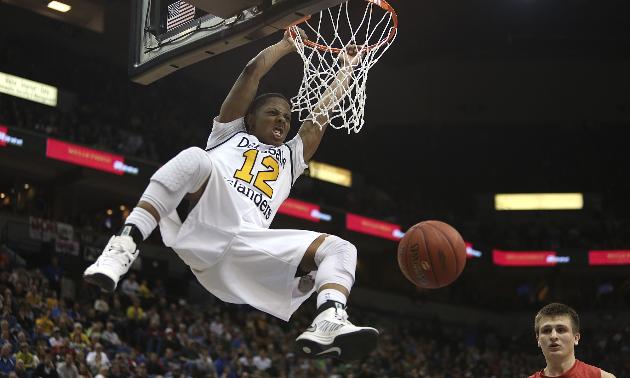 By JACK LEGWIN & ADAM ZAGORIA Minnesota coach Richard Pitino continued his recruiting roll on Friday when he received a pledge from Jarvis Johnson, a 6-2 combo guard from Minneapolis (MN) DeLaSalle who took an official visit to campus last weekend. Johnson also considered Wisconsin, UNLV, Baylor and Wichita State, but ended up being Pitino’s first recruit from the state of Minnesota. “I would like to thank God first for putting me in the position that I am in today,” Johnson said. “I gave much thought and time into my college decision. I am proud to announce that I will be attending the University of Minnesota.” Johnson, ranked No. 101 in the class of 2015 by 247 Sports, is super quick off of the bounce and can drill it from deep.  Johnson joins point guard Kevin Dorsey of Montverde (FL) Academy and shooting guard DuPree McBrayer of Sunrise (KS) Christian to give the Gophers a three-headed guard monster going forward that will complement one another. The Gophers also landed a commitment from 6-10 New York big man Jonathan Nwankwo, now at Victory Rock Prep (FL). Photo: Kyndell Harkness, DML – Star Tribune