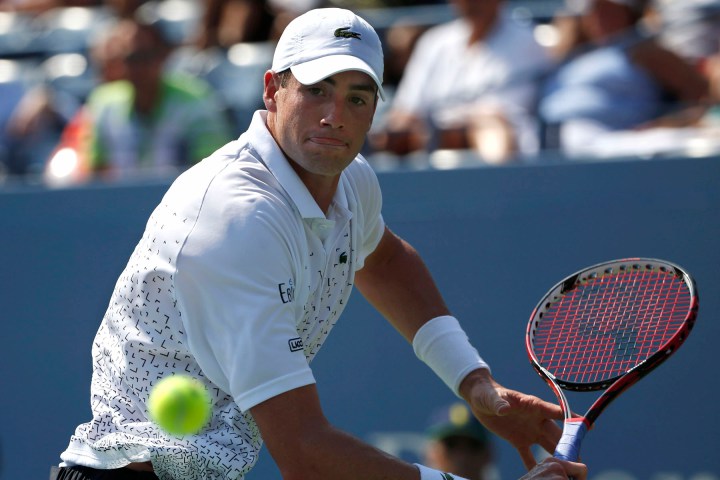 NEW YORK — When the U.S. Open began on Monday, there were 12 American men in the field of 128. Only three of them advanced through to the second round, a record for futility in the Open Era. No. 15 John Isner and Sam Querrey both won their second-round matches Thursday afternoon, while Tim Smyczek lost his second-round match Friday to No. 17 Roberto Bautista Agut, 6-3, 6-2, 6-1. “There is not many American men in the draw to begin with,” Querrey said after dispatching Guillermo Garcia-Lopez of Spain, 6-3, 6-4, 6-4. “You know, if Novak [Djokovic] wins next round I have to play him; that will be a tough one. I hope we can have a few guys in the second week. That would be great for men’s tennis here.” Still, it’s entirely possible that both remaining American men could soon be out. On Saturday, Querrey will play Djokovic, the No. 1 seed and favorite to win the Open. Also on Saturday, for the third year in a row here in the third round, Isner gets German Philipp Kohlschreiber, the No. 22 seed. Isner lost the previous two encounters to the German. Already young hopefuls like Donald Young, Noah Rubin and Jack Sock, who retired Wednesday with a leg injury, have crashed out in the first round. The statistics on the futility of American men are well known. No American man has won a Grand Slam singles title since Andy Roddick won here in 2003. And no American man has reached the quarterfinals of a major since Isner did it here in 2011. Isner and Querrey seem tired of answering questions about the issue, and get defensive when asked. “A little bit,” Querrey said. “I mean, question is fair enough, though. At the end of the day it’s an individual sport. I don’t really care too much. I mean, I want all the Americans to do well, but I want them to do well for them. I don’t really — you know, they are doing it for themselves. I don’t really know where I’m going with this answer right now, to be honest.” Before his second-round win over Jan-Lennard Struff of Germany by the count of 7-6 (5), 6-4, 6-2, Isner seemed especially defensive when asked about the state of American men’s tennis. “I try not to focus on some of the negative things that people say about American tennis,” he said. “… I get the brunt of it a lot, because if I win and play well it’s because I have a big serve and I can hit my forehand pretty well and that’s it. But if I lose, it’s only because that’s all I can do. So sometimes I feel like I can’t win no matter what.’’ There is no clearcut solution either. Patrick McEnroe, the general manager for player development with the USTA, preaches patience and says America lags behind its foreign competition in terms of certifying coaches. “I think we have great coaches,” Querrey said. “I think the USTA does a great job of employing great and talented coaches. As far as serve and volley goes, I don’t know any coach in the USTA system that’s advocating or teaching serve and volley. That’s really not today’s game. I think Patrick and those guys do a great job with coaching all the young players up to the pros.” John McEnroe, who has his own tennis academy on Randalls Island, continues to say the tennis community needs to bring better athletes into the game, at one point suggesting maybe tennis should involve some 7-footers. “If you look at the other countries…we need to get our top athletes playing,” John said the other day on ESPN. “We need to get the guys that we have making progress…We’ve gotta make this game more accessible. “But to get those champions, those Grand Slam champions, we’re not there.” Isner, Querrey and the others also happen to be playing in a Golden Era of tennis when the Big Four of Roger Federer, Rafael Nadal, Djokovic and Andy Murray have won 36 of the last 38 majors and don’t look like they’re going anywhere soon. Sounding somewhat resigned, Querrey said of the Americans, “We are all working as hard as we can and doing everything we can. We all want to win and we all want to be in the second week, and hopefully that can be the case in the years to come.” Photo: AP

Serena Leaving Legacy of Talented American Women in Her Wake