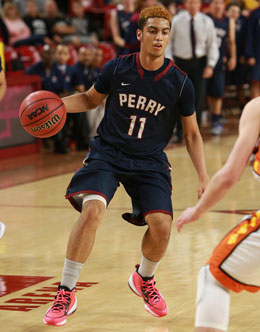 By JACK LeGWIN Markus Howard, one of the top players in the Class of 2017, has committed to Arizona State. “Blessed beyond belief to be a Sun Devil thank you to everyone who’s supported me in this process,” Howard tweeted. Howard is ranked No. 52 in the new Class of 2017 rankings by 247 sports. Electric off of the bounce, Howard dominated competition in his freshman year, averaging 23 points per game for Perry (Az.). He was a Max-Preps Second-Team All- Freshman selection nationally. “Right now, I’m doing everything that I can to get ready for the next level,” Howard told SNY.tv in an interview back in May. “Even when I was younger, I’d always play an age group or two up, so I could get that experience.” Follow Jack on Twitter