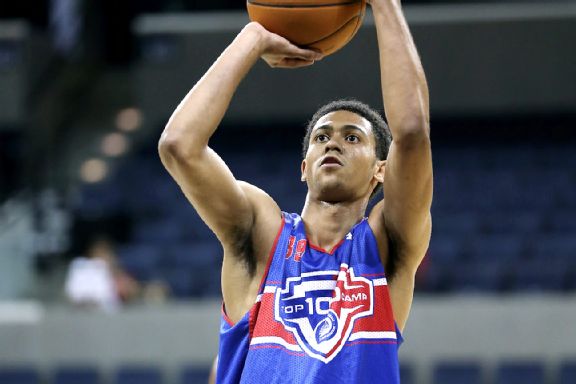 After cutting his list to 10 schools, former Arizona commit Tyler Dorsey has set several official visits. The 6-foot-5 2015 lead guard will visit Oregon Sept. 5-7, Colorado Sept. 19-21,  Kansas for “Late Night in the Phog” Oct. 10-12 and Arizona State Oct. 17-19, according to Dinos Trigonis, Dorsey’s AAU coach. Dorsey, out of Los Angeles Maranatha High, has narrowed his list to Arizona State, Cal, Colorado, Georgetown, Kansas, Louisville, Oregon, St. John’s, UConn and UNLV. Before narrowing his list, Dorsey also seriously considered Missouri, Oregon State, SMU, Tulsa, USC and Utah and during his high school career has been offered by top programs like Arizona, Duke, UCLA, Kentucky, Florida, Illinois, North Carolina State and Texas. Dorsey is ranked No. 18 in the nation by Rivals.com and No. 25 in the nation by 247Sports.com’s composite rankings. Dorsey was selected co-MOP of the 2014 Pangos All-American Camp in Long Beach, CA. He is also a three-time invitee to the adidas Nations as well as a two-time invitee to the NBA Top Camp. Follow Adam Zagoria on Twitter And like ZAGS on Facebook

USA U17s to Play Australia for Gold Medal on Saturday