USA U17s to Play Australia for Gold Medal on Saturday 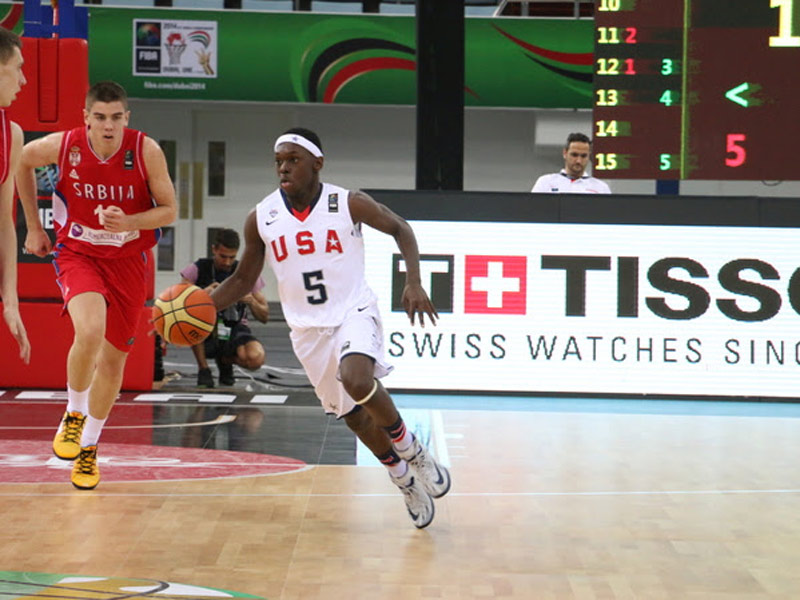 The USA U17 team will play Australia for the gold medal in the U17 World Championships on Saturday in Dubai. The game will be shown live by ESPN3 at 1 p.m. ET, and will be rebroadcast at 10 p.m. on ESPNU. “It’s great,” said 2016 guard Tyus Battle of Gill St. Bernard’s in New Jersey after putting up 11 points, 8 rebounds and 2 steals in an 89-68 semifinal win over Serbia. “We’re going to the gold medal game. It should be a lot of fun and hopefully we’ll bring the gold medal back to the United States. Australia beat Spain, 80-74, in the other semifinal. “We knew coming in it was going to be a tough test,” said USA head coach Don Showalter (Iowa City H.S., Iowa), who now owns an overall 22-0 win-loss record in FIBA U17 World Championship games and piloted the 2010 and 2012 USA U17 teams to gold. “We told our kids that Serbia has had a history of really giving the United States trouble in games. You go back and the mid-2000’s and games like this Serbia has won. I know their coach and team has been preparing to play us for the past couple of years. So, we prepared our kids. Our kids really were prepared mentally, physically for a really knock-out, tough game.” Malik Newman (Callaway H.S./Jackson, Miss.) scored 15 points to lead the USA’s offensive efforts, Diamond Stone(Dominican H.S./Milwaukee, Wis.) followed with 12 points, and Harry Giles (Wesleyan Christian Academy/Winston-Salem, N.C.) posted a double-double with 10 points and 12 rebounds.

The bench again played an integral part in the USA’s victory, especially through the production of Caleb Swanigan(Homestead H.S./Fort Wayne, Ind.).

“Caleb is one of those guys who doesn’t get a lot of credit for what he does,” said Showalter. “But, he just comes in and is a workhorse. He did a fantastic job tonight. He had 11 points, eight rebounds, diving on the floor after loose basketballs, taking a charge. He’s a high-energy guy. You have to love guys like that who play. I thought Tyus Battle was Usain Bolt for us tonight. And those guys, if they don’t play they’re not sitting on the bench pouting. They’re great teammates and when they have the chance, they make the most of it.”