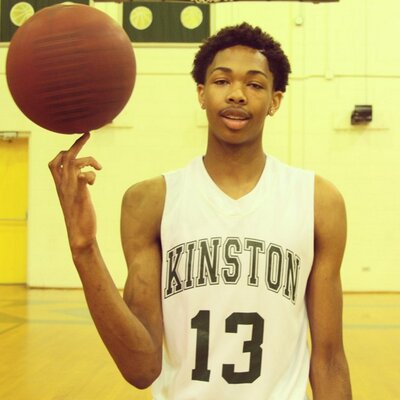 Brandon Ingram Tweeted that he took an unofficial visit to North Carolina Monday and will trim his list to seven schools by the end of August. “UConn offered,” he tweeted. “Done with the late comers. List will be narrowed to 7 end of August.” “He visited Carolina to watch them practice,” Ingram’s high school coach, Perry Tyndall of Kinston (N.C.), told SNY.tv by phone Monday. “They’re going to the Bahamas and so he was just going to watch them practice tonight.” North Carolina is considered among the favorites for the 6-foot-8 Ingram in part because he plays for Stackhouse Elite, the AAU program of the former Carolina star, but Tyndall says not to read too much into it. “I think that Jerry wants what’s best for Brandon and I don’t think Jerry’s necessarily steering him anywhere,” he said. “It’s wherever Brandon feels like is the best fit, and I know Jerry wants Brandon to go through the process with his family. We all do, just to figure out what he likes and where he feels comfortable and what system he feels like he can step into and be effective. Honestly, I think there’s several places he could play and be effective. “I think a lot of people thought it would be a shoo-in that Brandon would go there [to North Carolina] but that’s definitely not the case. Brandon’s really wide open, even with his unofficial to UCLA. he had a good time there. He’s enjoying seeing the different schools. As he starts to narrow it down, I know it’s going to be a tough decision for him.” Ingram visited UCLA last week along with Jaylen Brown and Thon Maker. “UCLA visit was great,” Ingram Tweeted. “Loved everything about it.” After the UCLA unofficial, Ingram took an official to Duke. “I think [the Duke visit] went really well,” Tyndall said. “According to his dad, it went great. I think the overall visit was good. His dad said they enjoyed it. In addition to North Carolina, Duke, UConn and UCLA, he also holds offers from Kentucky, Kansas, Duke, Wake Forest, Florida, Louisville, Clemson and N.C. State. Ingram told SNY.tv at Adidas Nations last week that he does not have any dates finalized yet, but he will definitely take official visits to Kansas for Late Night in the Phog and Kentucky. Tyndall said a Louisville visit is also in the works. “I know he wants to go out to Louisville and Kentucky and I think he may hit those pretty close since they’re not far,” Tyndall said. “And I think he may be going to Midnight Madness at Kansas.” A strong coaching staff and next level preparation are key factors the 6-foot-8 forward is looking for in a program. “I am looking for a program that has a great coaching staff that can make me better,” Ingram told SNY.tv at Adidas Nations. “It’s also important that the coaches prepare me for the next level after college basketball.” Ingram feels that the school he picks would be receiving a highly skilled and talent that can provide offense from multiple spots on the floor. “My versatility is something I pride myself on,” Ingram said. “I can play on the perimeter, go inside against smaller defenders, shoot over the top of anybody and attack the basket.” Said Tyndall: “Brandon’s just so versatile. With us at our team camp this summer, he played the point guard position this summer and was very effective. He’s got such a great skillset and he’s young. The knock on him has been his frame and his strength, but he’s still young and he’s still developing. “He can shoot it , he can dribble, he’s got a lot of different intangibles that make him so versatile.” And Like ZAGS on Facebook