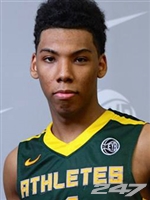 By JACK LeGWIN Special to ZAGSBLOG NORTH AUGUSTA, S.C. – Allonzo Trier has put on a show at Peach Jam, despite dropping two close games to Each 1 Teach 1 Elite and CIA Bounce. Averaging 25.5 PPG in 3 games, Trier has played in front of Arizona’s Sean Miller and Louisville’s Rick Pitino, and he lists those as two schools that are working hard. “Arizona, Louisville, UCLA, Washington, North Carolina, Kentucky, Maryland, Georgetown,” Trier said. Trier has not received an offer from Kentucky, but he says that Coach [John] Calipari has been in touch.  “Coach Calipari has texted me,” Trier said. “He’s been following me around and has been saying I’ve been having a terrific summer, he’s loving the way I’ve been playing.” Trier was double-teamed mostly in the first half against E1T1, with Ben Simmons leading the charge defensively. Trier said that it didn’t bother him too much, but that in the long term, it became tiring. “There was really no problems with the size,” Trier said. “I’ve seen every defense that they can throw at me. It wears you out though. I probably have it harder than any other scorer in the country. Just because of the way that teams are going to guard me. I’ve got to work hard to make my baskets and to be efficient in any way that I can.” Follow Jack on Twitter