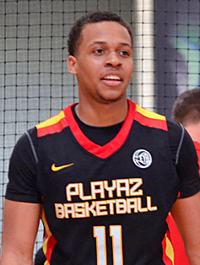 NORTH AUGUSTA, S.C. — This is Isaiah Briscoe’s last Peach Jam, and he’s playing like he wants to make it a special remembrance. After Thursday’s play, the 6-foot-3 guard has led the Playaz Basketball Club to a 2-0 record entering a big showdown at noon on Friday with CIA Bounce. The Roselle (N.J.) Catholic guard capped off Thursday by going for 33 points and six rebounds, including two clutch free throws in the final seconds, as the Playaz held off Team Takeover, 63-60. He went 17-of-20 from the line, creating numerous free throw-opportunities by driving into the lane with his now-chiseled 210-pound frame and drawing contact. Earlier, he went for 22 points, eight rebounds and four assists in an 81-47 beatdown of Team CP3. “He’s the best guard here,” one high-major D-1 assistant told SNY.tv, referring to the Class of 2015 crop. “I’m trying [to win],” Briscoe told SNY.tv following the nightcap. “I try not to let my competitive spirit get in the way, but at the same time I’m trying to do everything that I can possibly do for my team to win.” The gym was packed for the Takeover game, with the sidelines featuring Arizona’s Sean Miller, Louisville’s Rick Pitino and Wyking Jones, Rutgers’ Eddie Jordan and Mike O’Koren, Seton Hall’s Shaheen Holloway and St. John’s Tony Chiles and Rico Hines. “I just play the game,” he said. “I don’t know for sure what coaches was here. I just play the game.” Briscoe, who earlier this summer won a gold medal with the USA U18 team, plans to take some visits in August — and mentioned Louisville as one place he will trip to. “I want to see Louisville,” he said. “I’m looking forward to getting on some visits. I don’t know where I’m going to visit first, but I’m looking forward to it.” Briscoe recently cut his list to seven schools — the aforementioned five plus UConn and Villanova. After landing point guard Jalen Adams, it appears that UConn is no longer in the picture, leaving six other possibilities. Briscoe broke the schools down: Arizona: “Coach Book [Richardson], he’s great. Coach Sean Miller, he’s cool. I love Arizona, the campus is beautiful. They got a great coaching staff. We’ll see what happens.” Louisville: “[Pitino] is a Hall of Fame coach. From what I hear, he lets his guards go. I can see that he runs a three-guard offense, lot of pick-and-rolls and things like that. I just want to go somewhere where I can play my game.” Villanova: “They was recruiting me my sophomore year and not too long ago Coach Ashley [Howard] he said he wanted to pick up the recruiting, so I gave them a chance.” St. John’s: “Oh, playing in New York at the Garden and I’m pretty much from the Northeast area, so going there it’s crazy, I could bring St. John’s back on top.” Seton Hall: “They got [Isaiah] Whitehead, they got Desi [Rodriguez], great players. Stay home. Seton Hall is 20 minutes from my house., so staying home so my mom and dad can watch me play is big.” Rutgers: “And that goes for Rutgers also, I live about 40 minutes from Rutgers, they have a great campus.” Follow Adam Zagoria on Twitter And like ZAGS on Facebook