Dedric Lawson Down to UK and Memphis | Zagsblog
Follow @adamzagoria 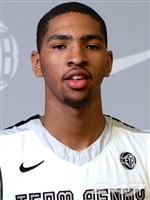 By JACK LeGWIN Special to ZAGSBLOG Dedric Lawson has narrowed down his list to two schools: Kentucky and Memphis. Ben Roberts was the first to report the news. The rising junior from Arlington Country Day (Fla.)’s older brother Keelon has already committed to Memphis. “When my brother committed to Memphis, everyone else just automatically thought that I was going to Memphis,” Lawson told Roberts. “So other schools stopped calling, except for Kentucky. They stayed on me, came to my games and came to my school.” Lawson told Roberts that he likes the way that Coach (John) Calipari lets his freshman play early. “I’ve been following Cal since he had Derrick Rose,” he said. “Calipari is a great coach. I love his system. I love the way he lets his freshmen get out there and play. He lets them play through mistakes, and by March they be rolling.” Lawson, listed at 6-foot-8, is ranked no. 5 in the nation by 247 Sports. Photo: 247 Sports Follow Jack on Twitter