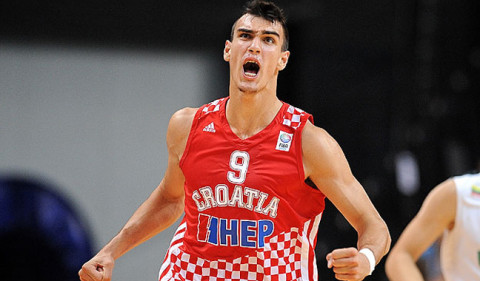 By JOSH NEWMAN Special to ZAGSBLOG NEW YORK – Whichever team drafts Dario Saric on Thursday evening is going to have to wait until 2016 for the payoff on its investment. The 20-year old Croatian phenom has inked a three-year deal, €6 million deal with Turkish League power Anadolu Efes. There is a player option for the third year, which means Saric is essentially out of the NBA mix for the next two seasons. With the player option potentially delaying Saric’s NBA debut even further, he says he intends to only play the first two years of Turkish contract before finally coming over to the United States. “One-hundred percent, for sure,” Saric said at NBA Draft media day on Wednesday when asked if he would come to the NBA after two seasons in Turkey. “”I will come to the NBA for sure, 100 percent in two years and that’s all. I will fight for a position, I will fight with all my heart. I’ve worked hard in Europe and I will work hard when I come to the NBA.” Saric flirted with entering the 2013 NBA Draft at 19 when he was draft-eligible for the first time, but ultimately decided to pull his name out and play another season with Croatian power KK Cibona of the Croatian and Adriatic Leagues. This past season in the Adriatic League, considered one of the best in Europe, the 6-foot-10 forward averaged 19.3 points, 9.6 rebounds and 3.8 assists in 19 games. Those numbers, not to mention leading Cibona to the Adriatic League title, helped Saric move up into the late-Lottery in several mock drafts. With the news that he won’t come over to the NBA until the 2016-17 season, his draft standing has taken a bit of a dip. DraftExpress had him as high as No. 10 to the Philadelphia 76ers, but he is now at No. 17 to the Boston Celtics. Some team in the first round is going to have the patience to wait Saric’s Turkish contract out, it’s just a matter of which one. It may take a team with multiple first-round picks to play with, of which there are eight, including the Celtics. “I made the decision that is best for me,” Saric said. “Two years in Europe to get more experience, to get my game better and take a step up. This is better for me, being in Europe for two years. “I’ll still only be 22 when I come over, it’s like being a senior on a college team.” “I think if some team really wanted me, they’re gonna choose me.” NBA rules state that first-round picks who have not signed within three years of being selected no longer have to negotiate under the league’s rookie scale. Under those circumstances, Saric could hypothetically get drafted on Thursday night, play the full three years in Turkey, then sign a much larger contract than what the rookie scale would allow. Follow Josh Newman on Twitter

Cheick Diallo Visiting Kentucky This Weekend; May Decide on College by December (UPDATED)