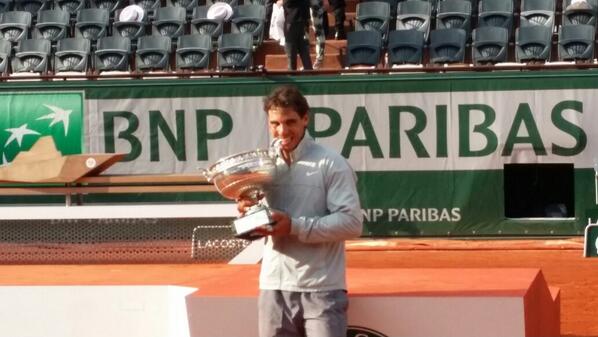 Rafael Nadal continues to cement his position as the Greatest of All Time in men’s tennis. Nadal extended his domination on Court Philippe Chatrier, winning his ninth Roland Garros title and 14th Grand Slam championship with a  3-6, 7-5, 6-2, 6-4 victory over Novak Djokovic in the 42nd meeting between the two rivals. Djokovic double-faulted on match point to conclude the 3-hour, 31-minute affair. Nadal is now tied with Pete Sampras at No. 2 on the all-time men’s list behind Roger Federer’s 17 Majors. He will also retain his No. 1 world ranking heading into Wimbledon later this month. Nadal is the first man in history to win five consecutive Roland Garros titles, and the first to win nine titles at any one Grand Slam. To put his nine French Open titles in perspective, that is more than the total number of Majors won by Andre Agassi, Ivan Lendl or Jimmy Connors. Bjorn Borg, the Swedish legend who won Roland Garros six times en route to 11 Majors, presented Nadal with the championship trophy. “For me, it’s amazing emotional today,” Nadal said. “I lost the final of Australia this year. I had problem with my back in the finals, so was a very hard moment. So today the tennis give me back what happened in Australia, no? For me, play here in Roland Garros is just unforgettable.” Djokovic had beaten Nadal in their four previous meetings, including in the Rome final last month, but fell to 0-6 against Nadal at Roland Garros. He was seeking to become the eighth man to win all four career Majors, but the French Open remains the elusive Major for him. “I am sure that you will win here in the future,” Nadal told Djokovic on court. “I don’t have any doubt on that.” Since 2005, Federer in 2009 is the only man other than Nadal to win at Roland Garros, and that was thanks to Robin Soderling’s stunning upset of Nadal in the fourth round that year. The Big Four of Nadal, Djokovic, Federer and Andy Murray have now won 35 of the last 37 Majors, but Nadal and Djokovic have captured 13 of the last 17. Follow Adam Zagoria on Twitter And like ZAGS on Facebook