Lance’s Agent Hopes to Get Deal Done With Pacers 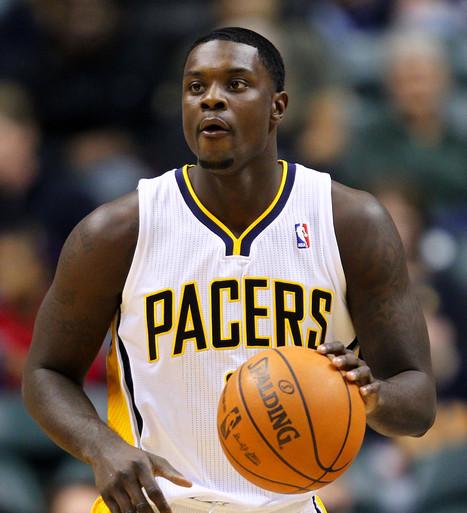 One day after Larry Bird said he wants Lance Stephenson back with the Indiana Pacers, Stephenson’s agent told SNY.tv the two sides hope “to get a deal done.” “They are a quality organization from the top down,” Alberto Ebanks told SNY.tv of the Pacers. “We are going to try to get a deal done. The communication has been there for the last four years with the Pacers and it has been beneficial for the Pacers and for Lance. I hope we can come to terms.” Ebanks told SNY.tv on Saturday that there would be “no shortage” of suitors for Stephenson, and reiterated Tuesday he plans to speak with other interested clubs. After the Pacers lost to the Miami Heat in six games in the Eastern Conference Finals, Stephenson expressed his desire to return to Indiana, where his idol Bird has mentored him throughout the early portion of tumultuous career. Addressing the media on Monday, Bird said he wanted the 23-year-old Brooklyn native back despite his antics against the Heat — which included blowing in LeBron James’s ear, touching James’s face and accumulating $15,000 in fines for flopping. “I think his ceiling is what he wants it to be,” Bird, the Pacers’ president of basketball operations, said according to ESPN.com. “I always want him back. You just don’t let talent like that walk away if you can help it.” Stephenson had his best year this season, leading the NBA with five triple-doubles and averaging 13.8 points, 7.2 rebounds and 4.6 assists, putting him in the mix for the All-Star Game. ESPN.com reported that Indiana “is expected to begin the offseason $8 – $12 million under next season’s projected luxury tax threshold and already has its four other starters under contract.” The Pacers have said they won’t pay the luxury tax, begging the question of how much they are willing to pay Stephenson. Some speculate that Stephenson could be a $10-$12 million-a-year player, while one former NBA GM told SNY.tv he was more likely to be in the $5-$8 million range. “We’ve talked about it briefly, but I haven’t sat down with the owner [Herb Simon] yet,” Bird said. “There’s going to be a price and we’re not going to go over that.” Follow Adam Zagoria on Twitter And like ZAGS on Facebook

Jordan Harris: The Next Great Lefty?