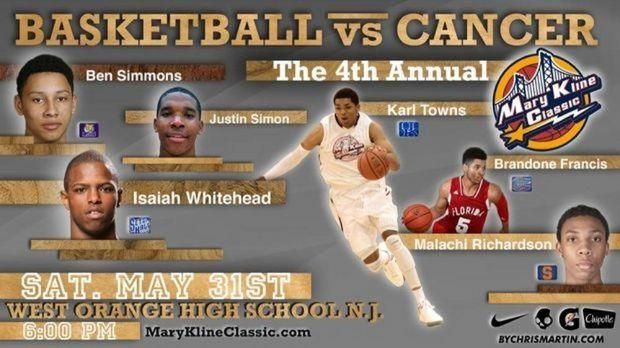 Alex Kline hosted the 4th Annual Mary Kline Classic this past Saturday at West Orange High School. The inspirational event raised $31,000 this year for cancer research and has taken in $86,000 over four years to fight cancer. Here are five quick takeaways on the events on the court: 1. Seton Hall’s loaded 2014 recruiting class has created a buzz — and justifiably so. Some 300-350 blue-clad Seton Hall fans made the drive to nearby West Orange and saw the four future Pirates combine for 45 points as Team Courage beat Team Perseverance, 103-90, in the Senior Game. Isaiah Whitehead went for 15 points, Khadeen Carrington had 12, Desi Rodriguez 10 and Angel Delgado 8. Three of these guys — Whitehead, Delgado and Rodriguez — also played together Thursday in the Frankie Williams Charity Classic in Greenburgh, N.Y. In that game, Delgado showed a solid handle and an ability to take the ball the length of the court off the rebound and dunk on the offensive end, while Rodriguez proved he is lethal in transition and near the rim. And remember, these guys also played in the Jordan Brand Classic Regional Game, where the 6-6 Rodriugez went for 17 points, including a key block to force OT. The more these guys (and fellow 2014 recruits Michael Nzei and Ismael Sanogo) play together, and bond off the court, the brighter the future in South Orange. 2. Miami is getting a nice piece in Neumann Goretti and Team Final point guard Ja’Quan Newton, who was team MVP for Team Perseverance with 21 points. Newton, who once talked of a potential package with Whitehead, has a high basketball IQ, plays with a change of speeds and showed an ability to penetrate and get fouled. Remember, he also earned MVP honors for the Away team in the Jordan Regional Game by notching 23 points back in April. “This is probably my last game [before Miami], so I just wanted to come out here and put on a show for the fans, and that’s what I did,” Newton told CityofBasketballLove.com in this story from the Mary Kline. 3. Derrick Jones, a 6-foot-6 2015 forward from Archbishop Carroll (PA), is obviously working on his shooting and is getting better. Jones led all scorers with 31 points to lead Team Bravery to a 137-105 victory over Team Inspiration in the Underclassmen Game, including going 4-for-6 from beyond the arc. Jones’s father told SNY.tv he plans to visit UConn soon, possibly this week, and he’s also working on visits to Louisville and Syracuse. Terrell Myers, Jones’s coach with WE R1, said Jones remains “wide open.” 4. Jamal Murray, the 6-5 2016 point guard from Orangeville (Ontario) Athlete Institute and CIA Bounce, looked tremendously poised and confident in going for 13 points in Team Bravery’s win. Murray is hearing from Ohio State, Georgetown, Michigan, Michigan State, Syracuse, N.C. State and Washington State, among others, Athlete Institute coach Larry Blunt told SNY.tv. “A lot of people have called and said they’re waiting until the 15th [of June] to call and offer just because of the rule,” Blunt said. 5.Remember the name Sedee Keita, a 6-10 2016 center from Vermont Academy and We RI who showed a nice outside shot for a big guy. According to Matt Pauls of WE R1, Keita has heard from Syracuse, Kansas, Maryland, VCU, Rutgers and Villanova, among others. “Sedee’s upside is great,” Pauls said. “The amount of improvement he’s had in the last year, the progression, is unlike any player that I’ve ever coached, just a one-year progression…He’s only been playing for three years but he’s a hard-worker, dedicated. I think he’s probably got another inch. He’s got great hands, great footwork, but he also shoots the 3 and steps out and actually take guys off the dribble.” Follow Adam Zagoria on Twitter And like ZAGS on Facebook

Lance's Agent Hopes to Get Deal Done With Pacers