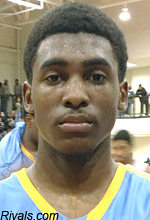 By JASON MORROW Special to ZAGSBLOG HAMPTON, Va. – With adding two recent offers from Indiana and Marquette, CIA Bounce forward Montaque “Teki” Gill-Caesar continues to help lead his team at Nike’s EYBL Session 3. The 2015 wing forward had 16 points in a 74-69 win over Each 1 Teach 1 on Sunday. There was discussion on Gill-Caesar reclassifying to 2014, but in the end he decided against it and will remain at Huntington (W.V.) Prep for another year. Plenty of schools are after the Canadian star, but the time has not come yet for his list to be cut. “I have no time set up,” Gill-Caesar said. As for what will help him make his decision, the 2015 forward did have more to say. “Somewhere where I will be able to play, play a lot of minutes,” Gill-Caesar told SNY.tv. “I want to be able to play my game and be comfortable with the guys on the floor and have a coach that is confident in my game.” Follow Jason on Twitter