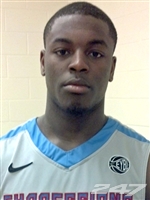 By JACK LeGWIN & ADAM ZAGORIA The second time was a charm for Jared Terrell and Rhode Island. After picking Oklahoma State over Rhody and other schools last fall, the 6-foot-3, 220-pound guard out of Brewster (N.H.) Academy chose Rhode Island over Boston College Thursday night. He had previously obtained his release from Oklahoma State. “I just thought it was a really good fit,” Terrell told SNY.tv by phone. “Me and Coach [Dan] Hurley’s relationship is really strong. There system fits my style of play. They’re going to put me in a postion to succeed.” Terrell said he went back and forth between Rhody and BC — the two schools he recently visited — but ultimately chose the Rams. “I decided [Thursday] night,” Terrell said. “I was going back and between them and BC. I couldn’t make up my mind and it was one of the hardest decisions i have made.” Terrell said he decommitted from Oklahoma State to come home because of “family issues.” Terrell will play in a three-guard set with incoming guard  Jarvis Garrett and sophomore E.C. Matthews. “They’ll play three guards, so all three of us will be playing with the ball in our hands and will be able to do multiple things,” Terrell said. With the additions of Terrell, Garrett, 6-8 junior college power forward Earl Watson and returning junior big man Jordan Hare, Rhody has improved its talent level dramatically.   Follow Jack on Twitter Follow Adam Zagoria on Twitter And like ZAGS on Facebook