Caleb Swanigan Reclassifies to Class of 2015 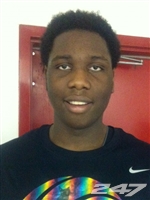 By JACK LeGWIN Special to ZAGSBLOG Monday afternoon, elite big man Caleb Swanigan announced that he has reclassified from the class of 2016 to the class of 2015, making him a top prospect as a rising senior.  “I have reclassified to the 2015 class a lot of extra school work but defiantly worth it,” Swanigan tweeted. Swanigan, who was previously ranked No. 16 in the loaded class of 2016 by 247 Sports currently has offers from Michigan State, Florida State, Georgetown, Illinois, Indiana, Louisville, Notre Dame, Pittsburgh and Tennessee. Listed at 6-foot-8, 265 pounds, Swanigan has been a beast so far on the EYBL circuit, averaging 19 points and 11.2 rebounds per game for Spiece Indy Heat. Photo: 247 Sports Follow Jack on Twitter Follow Adam Zagoria on Twitter And like ZAGS on Facebook