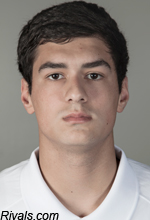 By JACK LeGWIN Special to ZAGSBLOG Andrew Fleming chose the Iowa Hawkeyes over Florida, Ohio State, UNLV, Vanderbilt and Memphis on Monday afternoon. “I have decided to play college basketball at the University of Iowa! #HAWKEYENATION,” Fleming tweeted. Fleming, a 6-foot-4, 200 pound shooting guard from Nashville, Tenn., will join Brandon Hutton of Chicago DeLaSalle as the second commit for Iowa in the Class of 2015. The Hawkeyes also have a commitment from 2016 forward Cordell Pemsl. Fleming was named Tennessee’s Division II-AA Mr. Basketball last season after leading Ensworth High School to its fourth consecutive state title. He averaged 18.9 points and 4.6 rebounds a game. Considered a great shooter and very good playmaker, he will play for Oak Hill Academy (Va.) for his senior year. “Big time shooter off the catch or bounce,” Oak Hill head coach Steve Smith told SNY.tv. “Quick release coming off screens. Great 3-point range. Strong 6-4 off guard with a good feel for how to make plays for himself or a teammate. Excellent passer of the basketball.” Follow Jack on Twitter Follow Adam Zagoria on Twitter And like ZAGS on Facebook

Caleb Swanigan Reclassifies to Class of 2015