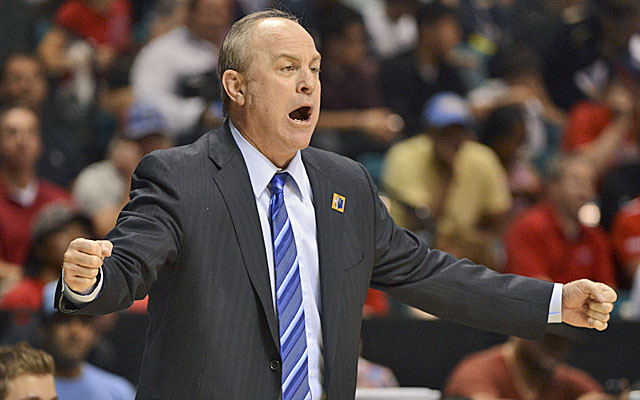 Former UCLA coach Ben Howland is a “a very serious candidate” to replace Craig Robinson at Oregon State, a source close to the situation told SNY.tv. Howland, 56, led UCLA to three consecutive Final Fours from 2006-8 but was let go following the 2012-13 season. He was in the mix for the openings at Marquette, Tennessee and Missouri, but did not land any of those jobs. The Oregonian reported that Oregon State AD Bob De Carolis “was in touch” with Howland “as far back as early last month.” Robinson, the brother-in-law of President Obama, was fired Monday, six weeks after the season ended. Arizona assistant Damon Stoudamire and Montana’s Wayne Tinkle have also been mentioned, as has UCLA assistant David Grace, a former OSU assistant who has recruited well at UCLA. “[De Carolis] wants to bring in a head coach if he can bring in a head coach,” the source told SNY.tv. “He made a move like this, you just don’t make it flying by the seat of your pants.” Oregon State is on the hook to Robinson for $4 million over the next three years, but can theoretically pay Howland less than it might otherwise because UCLA is still paying him. The Oregonian reported Howland would want a six-year deal worth $1.5 million annually plus $200,000 per assistant coach. “Howland makes sense because he can take less,” the source said. “He’s already getting paid by UCLA while OSU is having to pay [Robinson].” Howland, or whoever the next coach is, faces a major rebuilding situation at Oregon State, which hasn’t made the NCAA Tournament since 1990 when Gary Payton was there. Oregon State loses all five starters, including forward Eric Moreland, who declared for the NBA Draft, and guard Hallice Cooke, who is transferring, spent the weekend visiting Iowa State and is not expected to return to Oregon State. Oregon State recently landed a pledge from Maryland transfer Nick Faust, but he told SNY.tv he is reopening his recruitment and would still consider Oregon State “depending on who the coach is.” The Beavers also have a four-man recruiting class, including 6-8 California power forward Cameron Oliver, who recently committed. 2016 Gig Harbor (Wash.) Peninsula shooting guard JaQuori McLaughlin has decommitted from Oregon State, according to Josh Gershon of Scout.com. Follow Adam Zagoria on Twitter And like ZAGS on Facebook