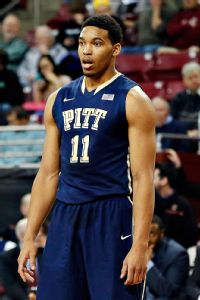 Pittsburgh center Derrick Randall of Brooklyn was arrested and charged with DWI on the Rutgers campus early Tuesday morning and has been indefinitely suspended by the Panthers, according to multiple reports. Randall, who transferred to Pitt from Rutgers, was also charged with use of a controlled dangerous substance and possession of a controlled dangerous substance. “The incident involving Derrick Randall this morning is not only surprising but incredibly disappointing,” Pitt coach Jamie Dixon said in a statement Tuesday. “Although I believe it was out of character for Derrick, he has been indefinitely suspended.” Randall, a former star at Paterson (N.J.) Catholic and South Kent (Conn.), averaged 2.4 points and 2.1 rebounds last season. Photo: Fred Kfoury III/Icon SMI Follow Adam Zagoria on Twitter And like ZAGS on Facebook