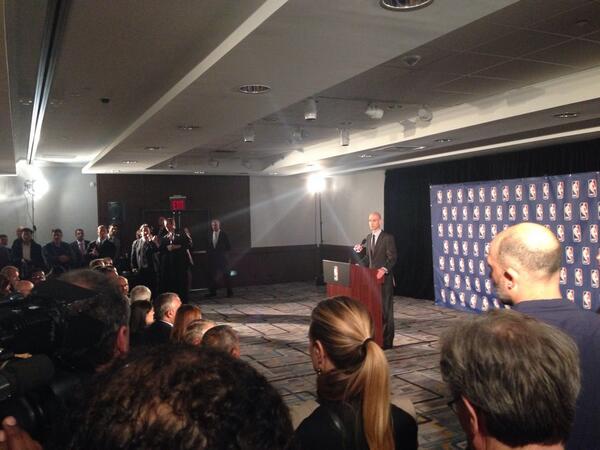 NEW YORK — In a bold and decisive move that opens his tenure, new NBA Commissioner Adam Silver has banned Donald Sterling for life from any association with the Clippers or the NBA, he announced today at a press conference in Manhattan. “Effective immediately, I am banning Mr. Sterling for life from any association with the Clippers organization or the NBA,” Silver told a packed house of media at the Hilton Midtown. Silver has also fined Sterling $2.5 million, the maximum amount allowed under the NBA Constitution. The fine money will be donated to organizations dedicated to anti-discrimination and tolerance efforts that will be jointly selected by the NBA and the Players Association. As part of the lifetime ban, Sterling may not attend any NBA games or practices, be present at any Clippers office or facility, or participate in any business or player personnel decisions involving the team. He will also be barred from attending NBA Board of Governors meetings and participating in any other league activity. Silver also announced that he will urge the Board of Governors to exercise its authority to force a sale of the team. He said a three-quarters vote of NBA owners is required for Sterling’s removal. According to Forbes, Sterling bought the Clippers in 1981 for $12.5 million and the team has been valued anywhere from $575 million to $1 billion. “I fully expect to get the support I need from the other NBA owners to remove him,” Silver said. One Board of Governor member told Adrian Wojnarowski of Yahoo! Sports: “Adam has the votes – all of them, I believe.” Said Knicks owner James Dolan: “I have been in touch with the NBA and fully support Commissioner Silver’s decision. I applaud Adam for acting quickly and decisively in appropriately addressing these disgusting and offensive comments. This kind of behavior has no place in basketball, or anywhere else, and we as a league must stand together in condemning this ignorance.” The Clippers issued this statement:  “We wholeheartedly support and embrace the decision by the NBA and Adam Silver today. Now the healing process begins.” Numerous other former players, current players and owners chimed in on Silver’s decision, including Magic Johnson, who was specifically targeted in Sterling’s racist rant. “Former and current NBA players are very happy and satisfied with Commissioner Silver’s ruling,” Magic Tweeted. “Now the Clippers players and fans can concentrate on the game tonight against the Warriors with Commissioner Silver’s decision. Current and former NBA players now know that in Commissioner Adam Silver we have a great leader leading our league. Now let’s hope that the other 29 owners do the right thing. “The people who I’m happiest for are Coach Doc Rivers, the Clippers players and fans.” LeBron James Tweeted: “Commissioner Silver thank you for protecting our beautiful and powerful league!! Great leader!! #BiggerThanBasketball #StriveForGreatness.” Photo: Moke Hamilton Follow Adam Zagoria on Twitter And like ZAGS on Facebook