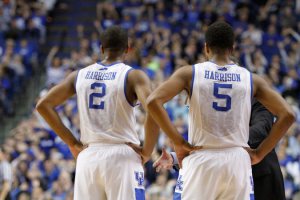 After coming to grips with the fact they weren’t highly regarded in the 2014 NBA Draft, Andrew and Aaron Harrison will return to Kentucky for their sophomore seasons. “I’m coming back for a second season in large part because last year’s title run was special, but we still have unfinished business,” Aaron Harrison said. “I’m returning for my sophomore season because I want to win a national title.” Andrew Harrison said. “I’m excited about Aaron and Andrew’s decision to return for next season,” head coach John Calipari said. “Their postseason play was a result of the improvement they made all season and displayed what they’re capable of doing on the court. I look forward to having the opportunity to work with them during the summer and watch them lead next year’s team.” Adrian Wojnarowski of Yahoo! Sports broke the story earlier Friday, Tweeting: “Harrison twins have been torn, going back and forth on staying or leaving Kentucky, sources say. Flip-flopped several times in recent days.” Earlier this week, Aaron Harrison Sr. said he was awaiting feedback from the NBA ahead of Sunday’s 11:59 p.m. deadline for underclassmen to declare. Both twins are projected in the 2015 NBA Draft — not 2014 — by DraftExpress.com. “They both need another year,” one NBA scout told SNY.tv Thursday. “I think they will both help their stock by staying, especially Andrew Harrison.” Julius Randle and James Young have announced their plans to head to the Draft from Kentucky, while the Harrisons, Dakari Johnson, Marcus Lee, Alex Poythress and Willie Cauley-Stein are all returning to what should be a loaded team with six projected 2015 picks. Kentucky next year will have nine McDonald’s All-Americans and the Nos. 4 (Karl Anthony-Towns), 8 (Cauley-Stein), 19 (Johnson), 26 (Aaron Harrison), 31 (Andrew Harrison)and 42 (Poythress) picks in the 2015 NBA Draft, according to DraftExpress.com. If the Harrisons show steady improvement next year, they could help their stock for the 2015 Draft. Both are projected as late-first or early-second round picks now. “What could propel them higher up the draft board a year from now would be a 35-game sample instead of what we’ve seen over three weeks,” ESPN’s Fran Fraschilla told SNY.tv at the Final Four. “I think it will help their stock because it will give them a chance to improve over the course of an entire season that they can play like they did over six games.” He added: “It wouldn’t surprise me at all if they come out and roll the dice but the more prudent way to look at this is they’re both still very young players who have to this point a limited opportunity to make a major impact on an NBA team next year. So they should think about coming back.” Incoming freshman guards Tyler Ulis and Devin Booker will presumably play backup roles instead of starting now. Last week at the Jordan Brand Classic, Ulis touched upon what head coach Calipari has planned for him and Booker regardless of whether the Harrisons returned to Kentucky or not. “Coach Cal told me that even if they [Harrisons] leave or stay that I’ll have to earn my position,” he said. “If they stay, that would be great for our team. That gives us a few more bodies and the bench will be pretty good as well. If they stay, that’s a decision and I just want them to make the best decision for them.” While a return for the Harrison twins may mean a bench role or less playing time for Ulis, there is the possibility of him sharing the court with one or both of them at the same time. “Andrew’s 6-foot-5, he’s big too. I’m pretty sure if he stays we’d be on the court at one time or another together,” he said. “Coach Cal hasn’t talked much about their decision. We’re just waiting to see what they’re going to do. I’m pretty sure Coach Cal will let us play together. He’s just going to put whoever is producing on the floor.” Booker, a potential backcourt mate for Ulis, offered his thoughts on what may come of the Harrisons’ decision. “I think that would be good for us if they [Harrisons] come back,” he said. “Like I said, more experience, but I wish the best for them. That’s their decision and I wish the best for them. I think they’d be good either way because I’ve played against them and they’re really good players. I really respect them.” Follow Adam Zagoria on Twitter And like ZAGS on Facebook