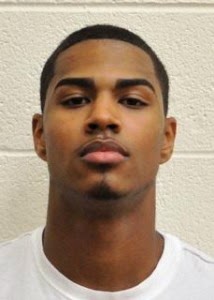 By ZACH SMART Special to ZAGSBLOG Keith Thomas’s consistency, collection of double-doubles, and furious-paced work ethic is what makes the 6-foot-8 Westchester Community College forward appealing to high-major Division-I programs. Thomas played just one year of high school basketball at Yorktown (N.Y.), spearheading the Huskers to the Section 1 Final Four. A rediscovery of how much he loves the game allowed Thomas to make a second run. Now the Mount Vernon native is one of the nation’s most hotly pursued forwards. “He was so consistent this year, but what I really like about Keith is he takes no prisoners on the court,” said Vikes head coach Tyrone Mushatt, who played at WCC himself in the mid-1990s. “There were some games against lower level competition where could have cruised. He could have said ‘Oh, this is going to be a cupcake game.’ He didn’t take anything for granted. He gave everything in every game. Thomas, who averaged 15.3 points and a NJCAA-leading 15.7 boards this season, earned NJCAA Region XV Player of the Year honors and led the Vikes to their first JUCO national tournament since 1996. Thomas will visit Loyola-Chicago this weekend. Thomas has received steady interest from St. John’s, Fordham, Loyola-Chicago, Florida State, and Wright State, according to Mushatt. Memphis and Dayton have jumped in on the KT sweepstakes, expressing significant interest in the 23-year-old. “Loyola-Chicago has been recruiting him for about 4-5 months now,” Mushatt said. “Keith is a kid who is about loyalty. They’ve been there since the very beginning and he recognizes that. Florida State is trying to get a visit setup. They’re another powerhouse program that he’s considering.” Mushatt has referred to Thomas as his “NAVY SEAL” for his toughness during workouts and ability to finish through contact and withstand the brutal hits inside the paint. Thomas authored efficiency during his freshman year at WCC. He shot a scalding 65.4 percent from the field, underscored by a mammoth 29-point eruption (13-for-14 FG) against Harcum and a 10-for-11, 22-point shredding of Orange County Community College.  Click Here to read the rest of this story.