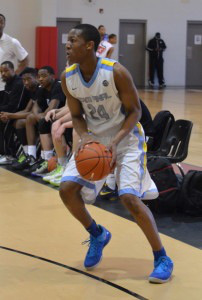 Seven schools are working the hardest for 2016 guard Tyus Battle, his father told SNY.tv. Gary Battle listed Ohio State, UConn, Virginia, Villanova, Michigan, Syracuse and Indiana as those “working the hardest.” Several of those schools are due in today (Thursday) and tomorrow (Friday) to see the 6-5 Battle work out at Gill St. Bernard.s Syracuse assistant Mike Hopkins was in Thursday, with UConn’s Kevin Ollie, Virginia’s Jason Williford, Michigan’s Jeff Meyer, Villanova’s Ashley Howard and Seton Hall’s Shaheen Holloway expected Friday. Fresh off winning the NCAA championship Monday night, Ollie will be in New Jersey for the Coaches’ Clinic at Roselle Catholic and will do some recruiting as well. Gary Battle said his son plans to visit UConn sometime next month. “We are going to go to UConn in May,” he said. They are also planning a trip to Virginia June 20. Photo: Josh Verlin

Self, Howard Visit Malik Newman, Devonte' Graham Up Next