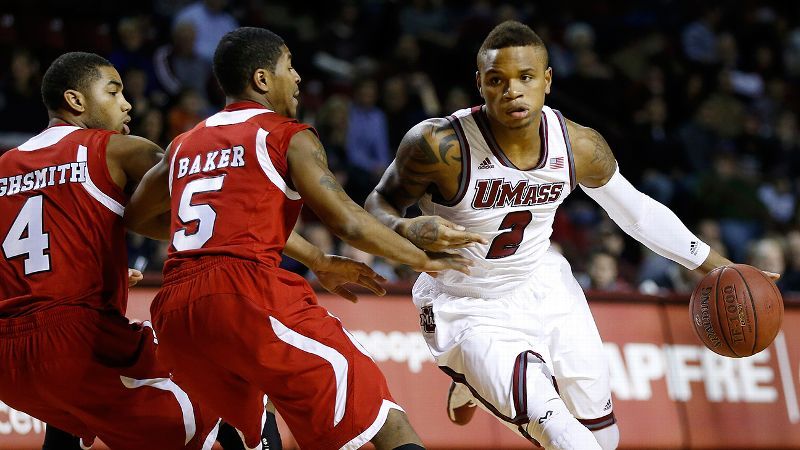 UMass redshirt sophomore guard Derrick Gordon has made history by coming out as the first openly gay male college basketball player. Gordon, a Plainfield, N.J., native whose time at St. Patrick High School in New Jersey alongside NBA players Kyrie Irving and Michael Kidd-Gilchrist was documented in the film “Prayer For a Perfect Season,“ made the landmark announcement on ESPN and in an ESPNW story. “I was thinking about summer plans and just being around my teammates and how it was going to be,” Gordon told ESPNW. “I just thought, ‘Why not now? Why not do it in the offseason when it’s the perfect time to let my teammates know and everybody know my sexuality.” Gordon said on ESPN that Jason Collins, who came out before signing with the Nets this season, inspired him to make the announcement. “When he came out I wanted to come out the next day,” he said. The 6-foot-3 Gordon started all 33 games last season for the Minutemen, averaging 9.4 points, 3.5 rebounds, 2.0 assists and 1.5 steals. UMass coach Derek Kellogg said on ESPN: “It’s great that this young man has the courage to come forward…I was actually very happy for him that he came to this conclusion that he was going to come out as a gay man. He’s been a great kid, a great person in the community and part of our program and he’s a family member to us. “For him to come to me, I was actually somewhat flattered that he would share this with me our team and now everybody.” Patrick School head coach Chris Chavannes, who coached Gordon as an assistant at St. Patrick under Kevin Boyle, released a statement on Wednesday afternoon. “During his years at St. Patrick High School, Derrick Gordon was always respectful, polite, and valuable part of the St. Patrick / Patrick School alumni community,” he said. “As a representative of Derrick’s former high school, I want to emphasize the fact that we respect and value diversity.  Our school respects individual differences and does not condone human rights abuses, intolerance, or discrimination of any kind. Derrick was an exceptional basketball talent and student while at St. Patrick’s.  He is a great young man and we commend him on his strength and courage.  He has our complete support.” Photo: ESPN