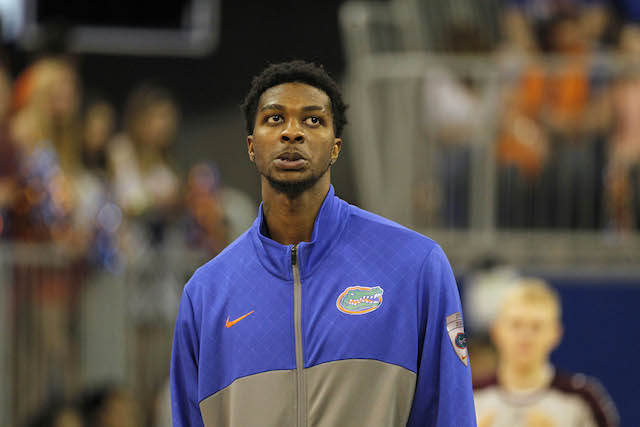 By JOSH NEWMAN Special to ZAGSBLOG In a move that can only be viewed as a wise one, 6-foot-10 Florida freshman Chris Walker will return to Gainesville for his sophomore season, he announced on Twitter late Wednesday afternoon. He tweeted, “This year has been a great one, and I’m happy to say I will be joining the gatornation again for one more year!” The Holmes County, Fla. native averaged only 1.9 points and 1.3 rebounds, but a lot of that was due to the fact he was not eligible to play in a game until Jan. 29. Considered a freakish athlete with a massive upside, Walker played in just 18 games for the 36-3 Gators, who lost to eventual-national champion Connecticut in the Final Four. “I know I’d be stronger,” he said on Friday at the Final Four in Dallas. “I’d probably be 20 times better than I am right now if I got there the first game.” DraftExpress currently has Walker slotted at No. 10 in the 2015 NBA Draft, which could be heavy with post players in the top 10 picks. Of the nine players on the board ahead of Walker, they include big men Jahlil Okafor, Myles Turner, Cliff Alexander, Trey Lyles and Karl Towns. All are freshmen-to-be and all stand 6-foot-9 or taller. Follow Josh Newman on Twitter