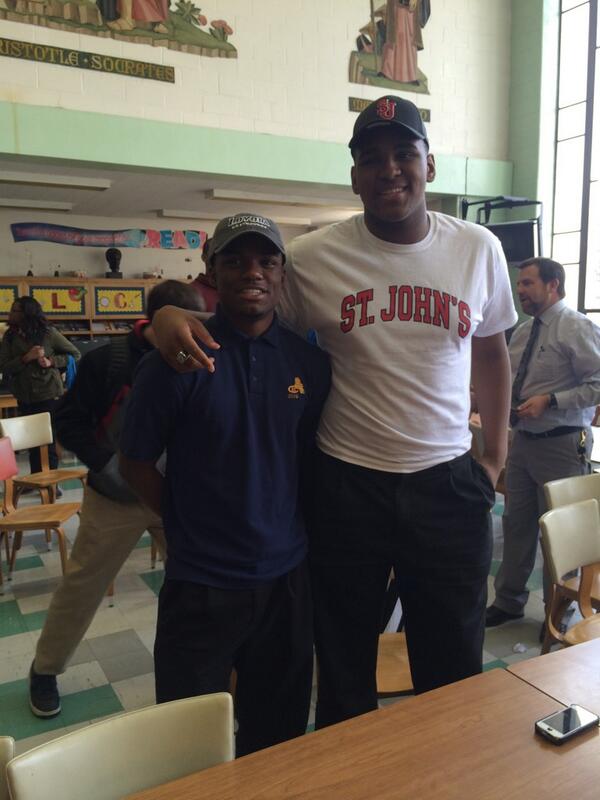 By BEN BASKIN & ADAM ZAGORIA NEW YORK — St. John’s picked up its first commitment in the Class of 2014 and it was a big one. Literally. Adonis Delarosa, a 6-foot-11, 256-pound center from Christ the King in Queens, verbally committed during a press conference Wednesday in the school’s library. Delarosa also considered Pittsburgh, South Carolina and Alabama, among others. Delarose, who averaged 12 points and 12 rebounds in helping lead CTK to a second straight New York Class AA Federation crown, said Pitt was a close second. Delarosa called it the “hardest decision of his life.” He said he’s been thinking about St. John’s for a while, but made the final decision Wednesday at noon. Delarosa was originally set to announce April 18 but moved up the presser because his older sister, Cindy, was diagnosed last week with cancer, he said. “The fact that I will be home, can be with my family, and also be an impact player as soon as I come in,” he said. “There’s nothing better than playing and putting on for your city. And also you get to play at the Garden.” The Johnnies desperately need bigs with the departures of Chris Obekpa (transfer), JaKarr Sampson (NBA Draft), Orlando Sanchez and God’sgift Achiuwa (graduation). Delarosa said he was looking forward to learning from Obekpa and said he was “shocked” when he heard about the transfer news. Joey Delarosa, Adonis’ older brother who stands 6-11, is also enrolled at St. John’s and could become eligible at Christmas after transferring from Florida International. Delarosa cited the presence of his brother and St. John’s assistant Tony Chiles in his decision to pick St. John’s. “Last year they didn’t have an inside presence that… could score,” Delarosa said. “Definitely next year they will with me on the team.” He also said that his goal was to make the NCAA Tournament next season after the Johnnies missed out this season. “I’m definitely trying to make the tournament next year,” he said. Delarosa must continue to get in shape if he is to be a factor going forward. “Conditioning is key,” long time New York recruiting expert Tom Konchalski told SNY.tv of Adonis Delarosa. “That’s the whole thing. He’s done a great job of shedding extra weight since he got to Christ the King, but he’s got to continue and improve that. For a big guy, he has a very high basketball IQ. He knows what he is. He can even handle the ball a little bit. He has a good jumper from the eblow. He plays below the rim. He has very good soft hands, and he’s a very good passer both out of the post and from the high post. “The better shape he gets in, the better his conditioning, the fewer plays he ends up taking off to pace himself, the more effective post player he’ll be…If he is committed he can be a factor.” WALKER TO LOYOLA (MD.) Christ the King point guard Andre Walker chose Loyola (Md.) over Boston University. The 6-foot Walker was named MVP after scoring 25 points when Christ the King beat Long Island Lutheran last month in the New York State Tournament of Champions “AA” Final. Photo: Ben Baskin