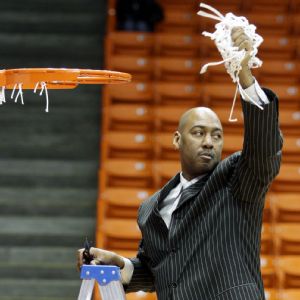 Danny Manning is the new head coach at Wake Forest. The No. 1 pick in the 1988 NBA Draft, Manning led Tulsa to a 21-13 mark this season, 13-3 in Conference USA, and an NCAA Tournament bid. A year ago, Tulsa went 17-16 and qualified for the CBI. Manning replaces Jeff Bzdelik,who went 51-76 in four seasons, 17-51 in the ACC. “We are very pleased to welcome Danny Manning to Wake Forest,” said AD Ron Wellman. “There have been very few players who have had as much success on the court as Danny. He has played for and worked under a number of legendary coaches and he has been successful in his coaching career. We fully expect that Danny’s coaching career will reflect the excellence of his playing career.” “A legendary player, Danny Manning has always been a great student of the game of basketball,” said Wake Forest University President Dr. Nathan Hatch. “Today, he is a great teacher of the game. I look forward to watching him mentor our players and build a championship basketball program at Wake Forest.” “I am excited about the opportunity to be a part of the history and tradition of Wake Forest,” said Manning. “I am extremely humbled by this honor and look forward to being the head coach and competing for championships both on and off the court.” Manning will join a loaded ACC next year that will feature six former Big East coaches in Jim Boeheim (Syracuse), Mike Brey (Notre Dame), Jamie Dixon (Pitt), Leonard Hamilton (Miami), and Rick Pitino (Louisville) and Buzz Williams (Virginia Tech). Photo: AP