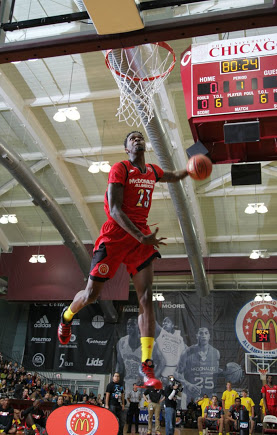 ARLINGTON, Texas –– Florida freshman forward Chris Walker says he will wait until after the Final Four to make any decisions about his future plans. The 6-foot-10 1/12, 220-pound Walker is projected as the No. 10 pick in the 2015 NBA Draft by DraftExpress.com, but some mock drafts have him in 2014 despite the fact the he has only 17 college games under his belt. “I haven’t really been thinking about it,” Walker said Friday in the Florida locker room. “I’m just thinking about winning this UConn game and staying in the moment and hopefully winning that and advance to the championship game. “And then after the season, me and coach [Billy Donovan] will sit down and talk about everything and all the options.” Walker wasn’t cleared until January because of eligibility issues and is averaging just 2.0 points and 1.4 rebounds, yet he said he if had been able to play from the start of the season he would be a force by this point. “I know I’d be stronger,” he said. “I’d probably be 20 times better than I am right now if I got there the first game.” Asked if he ever wondered what that would have been like, Walker said, “Sometime I kind of do but I ain’t got no reason to really think about it because we’re winning. We’re in a Final Four now. Everything I wanted to happen is happening still.” Donovan joked back in December that the hype surrounding Walker was so big that, “I feel like [Hakeem] Olajuwon or Dwight Howard’s walking through the door and it’s not that.” Walker has bulked up from 203 pounds and said his eventual goal is to get to 240-245. “Eating, lifting weights, just crushing food,” Walker joked. “I crush everything…Everything, I’m eating it.” He has benefitted greatly by learning alongside senior big man Patric Young. “Patric, he helps me a lot,” Walker said. “He helps me on the defensive end, he does everything right at practice and I just go follow him up and do the same thing.” He hopes when his number is called Saturday night, he can make an impact. “Once I’m out there and coach calls my name, whenever that is, I want to go out there and be aggressive offensively and defensively,” he said. “Really try to crash the offensive boards when our team shoots the ball and just try to get a W.”

Cauley-Stein Not Sure if He Will Play Against Wisconsin