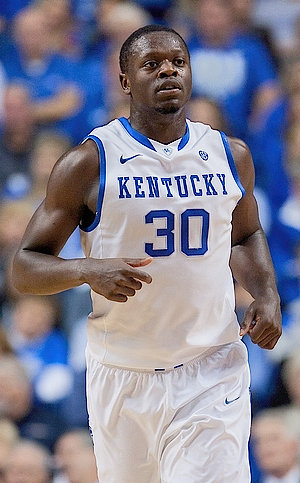 In this, the Year of the Freshmen, Andrew Wiggins, Joel Embiid, Jabari Parker and Aaron Gordon are all home watching March Madness on television. So are Tyler Ennis and Noah Vonleh. In fact, the only freshman projected in the Top 10 picks of the NBA Draft who is still playing is Kentucky forward Julius Randle. The fact that the 6-foot-9 Randle is still playing — and playing well — has only helped his draft stock. Jonathan Givony of DraftExpress.com has Randle at No. 4 on his Mock Draft, behind only Wiggins, Embiid and Parker, and that is unlikely to change. But one veteran NBA scout said NBA personnel think higher of Randle based on his strong play in the NCAA Tournament. Randle is averaging 15.1 points and 10.7 rebounds on the season, and 15.8 points and 12 boards entering the Final Four, where Kentucky will meet Wisconsin on Saturday in North Texas. “I think Julius Randle’s helped himself probably more than anybody in the draft,” one veteran NBA scout told SNY.tv. “It took him from 6 to 5 or 5 to 4 or whatever, but he’s definitely helped himself.” The scout admitted that he had been leaning toward Duke’s Parker — who remains undecided on his future plans — as the No. 1 overall pick but that both Parker and Wiggins under-performed in the tournament. “Maybe [Parker] didn’t live up to the numbers because they got beat and Wiggins’s last college game was abysmal, brutal, just awful,” the scout said. “And neither one of those two guys are playing. They’re supposed to be so great, they’re franchise and the next Kobe Bryant and they can’t even get themselves into the Sweet 16.” Of Randle, he added: “Julius is a legitimate guy because he’s a top-6 guy. He should come out. What else is he going to do there? Stand around next year and get triple-teamed? There’s no more for him [in college].” Except to try to win these last two games and close his career with an NCAA championship. “We aren’t relieved,” Randle said Tuesday, according to Kyle Tucker of the Courier-Journal. “You realize you’re going to the Final Four, of course you’re going to celebrate, but I mean, look: Guys are in the gym working right now. We’re not done yet.” Photo: US Presswire