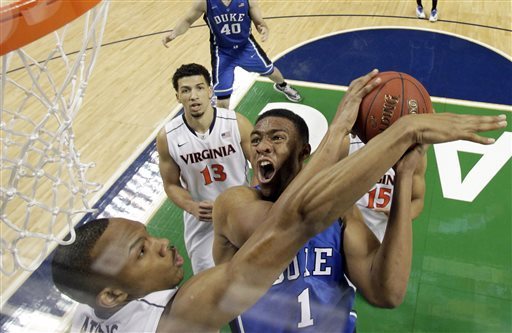 Sonny Parker, the former NBA player and father of Duke freshman star Jabari Parker, says his son is “undecided” about entering the NBA Draft. “He’s undecided and we know the [NBA’s Early Entry eligibility] deadline is the 27th [of April] so if he’s going to make a decision he has to make it by that date but right now he’s undecided,” Sonny told SNY.tv by phone Tuesday morning. The 6-foot-8 Parker is projected as the No. 3 pick in the draft behind the Kansas duo of Andrew Wiggins and Joel Embiid, according to DraftExpress.com. Wiggins on Monday officially declared for the draft, while the 7-foot Embiid has yet to publicly announce, although Yahoo! Sports reported he’s coming out. Sonny Parker said his son was focused on finishing up the academic year at Duke and not on his impending decision. “He’s still in school,” Sonny said. “He goes to Duke University. He’s hitting the books, man….It’s all about school for him. He has to just unwind from the season.” Asked if it was possible that Jabari might return for his sophomore season, Sonny said, “We don’t know. He has some time to think about it. This is his future.” He added: “It’s just going to be his decision. I don’t put no pressure on him. He’s gotta make a decision on when he’s coming out. He’s 19 years old now, he ain’t in high school right now.” Duke has the No. 1 recruiting class in the country, featuring four McDonald’s All-Americans, including 6-10 fellow Chicagoan Jahlil Okafor and 6-4 guard Grayson Allen, who jumped over Okafor Monday night to win the McDonald’s Dunk Contest. Sources told SNY.tv that redshirt sophomore Rodney Hood — projected at No. 16 by DraftExpress.com — will declare for the draft, but if by some chance Parker opted to remain on campus, Duke would be considered a favorite to win the NCAA championship in 2015. Parker was named an Associated Press first-team All-American on Monday after averaging 19.1 points, 8.7 rebounds and 1.2 blocks, all team-highs. Sonny said there was no timeframe other than the April 27th deadline. “We don’t have a timeframe other than what the deadline is” he said. Photo: News&Observer