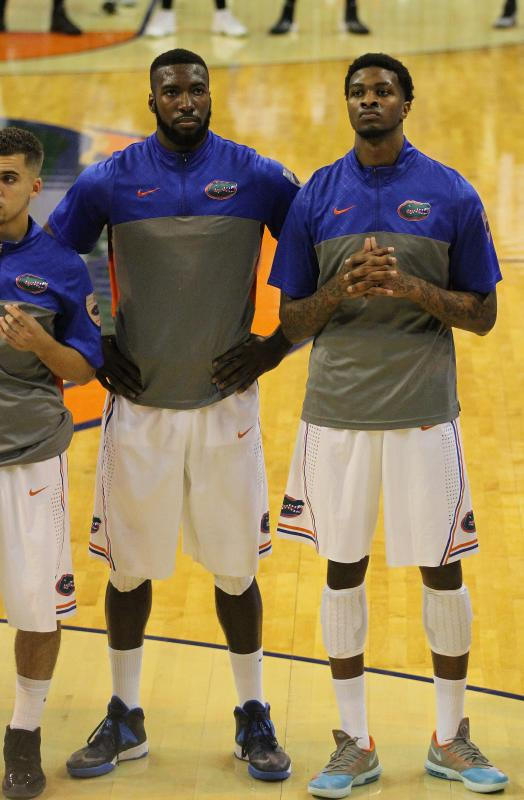 By JOSH NEWMAN Special to ZAGSBLOG Four months before advancing to Saturday’s Final Four against Connecticut, the University of Florida played in the Jimmy V Classic on Dec. 18 at Madison Square Garden. At that time, highly-touted freshman big Chris Walker had only been eligible to practice for a few days and would not be cleared to play in a game for another five weeks. Predictably, with the New York and national media in attendance that night following the Gators’ 77-75 win, the topic turned to Walker. Also somewhat predictably, Gators head coach Billy Donovan tried to undersell everyone on the 5-star recruit, doing so with a short anecdote on Walker’s first few practices in Gainesville. “He just got absolutely annihilated by Patric Young for three days,” Donovan said that night. “It was a very humbling experience for him.” Donovan, a Rockville Centre native, reiterated on Monday during a conference call that it has been a learning experience for Walker this winter. However, out of that first encounter with the Gators’ rugged senior forward, a mentor-mentee relationship was formed and Walker has been better off for it. “Patric explained to him why it’s important to stretch, how to go about stretching, getting yourself ready to play, get yourself ready for practice, not showing up 15 minutes before we practice to get taped, but get here 45 minutes or an hour before and get on the court,” Donovan said. “As a coach, we spent a lot of time with Chris just trying to get him caught up on what we do, but what was probably more impactful for Chris was the amount of time that Patric spent with him.” Walker has not been the one-and-done, Lottery-bound player a lot of people expected him to be, but a lot of that wasn’t his fault. The Holmes County, Fla. native was not cleared to practice until after the first semester was over and did not gain clearance for a game until Jan. 29,  It stood to reason that Walker, one of several standout freshmen across the country who were overhyped by the media,  would be well behind the 8-ball once he saw game action and that has proven true. He has seen a total of 85 minutes in 17 games, scoring just 34 point. Although, flashes of brilliance of been there at times, specifically on the defensive end where he has shown himself to be an athletic rim-protector. While Donovan and his staff have played their role in getting Walker up to speed, the 18th-year head coach will deflect a lot of how far Walker has come to Young’s tutelage. “I think Chris Walker has grown very, very fond of Patric just because of the amount of time and investment he has made in him,” Donovan said. “He really spent a lot of time helping him and that’s that way Patric is as a kid. It probably has less to do with Chris Walker and has much, much more to do with Patric. I think if any player was here in the situation Chris Walker was in, I think Patrick would do it.” Young has been a stalwart for this senior class, which advanced to its first Final Four when it defeated Dayton, 62-52, in the South Regional final over the weekend. When the Gators take the floor Saturday against UConn, it will be the 150th game and 107th start of his career. Follow Josh Newman on Twitter