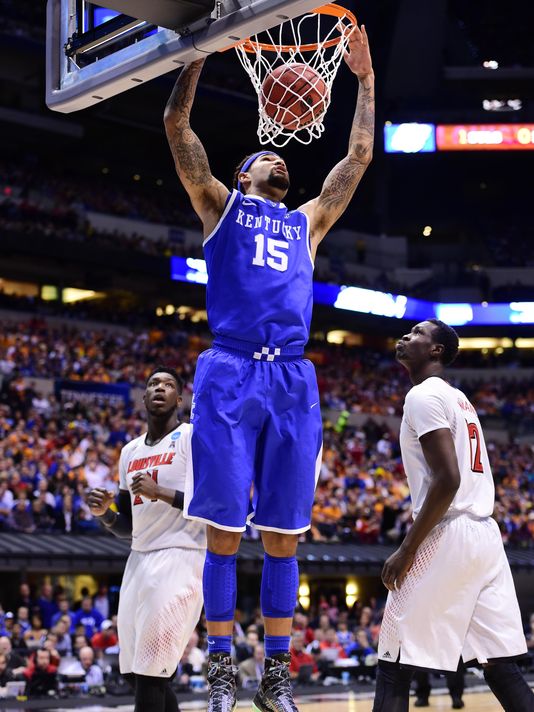 John Calipari called sophomore 7-footer Willie Cauley-Stein doubtful for the national semifinals against Wisconsin on Saturday. “I doubt he plays and he will be on our bench cheering like crazy,” Calipari said Monday on a conference call. Cauley-Stein missed Kentucky’s 75-72 win over Michigan in the Midwest Regional final Sunday. He was in a walking boot after injuring his left ankle in the first half against Louisville on Friday night. Cauley-Stein is averaging 6.8 points and 6.1 rebounds on the season. NBA scouts previously told SNY.tv that Cauley-Stein’s injury likely wouldn’t impact his draft status. DraftExpress.com has him at No. 12 to the Orlando Magic. KENTUCKY WILL WATCH McDONALD’S GAME Calipari also said that his team would watch Wednesday night’s McDonald’s All-American Game from Chicago’s United Center, but that he would probably tape it. “We got four players in it,” he said. “We got four great kids. They’re terrific basketball players. You’re talking about four great, great kids…I imagine our team will watch it live because they all played in it.” All four 2014 Kentucky pledges are in the game — point guard Tyler Ulis, shooting guard Devin Booker, power forward Trey Lyles and center Karl-Anthony Towns of St. Joe’s Metchuen. Both Lyles and Towns were also named Monday to the World Select Team for the 2014 Nike Hoop Summit set for April 12 in Portland, Ore. The McDonald’s game will be shown live on ESPN at 9:30 p.m. ET. Here are the full rosters.