Andrew Wiggins Makes It Official: He’s Headed to the NBA; Canada Expected to Have 2 Lottery Picks 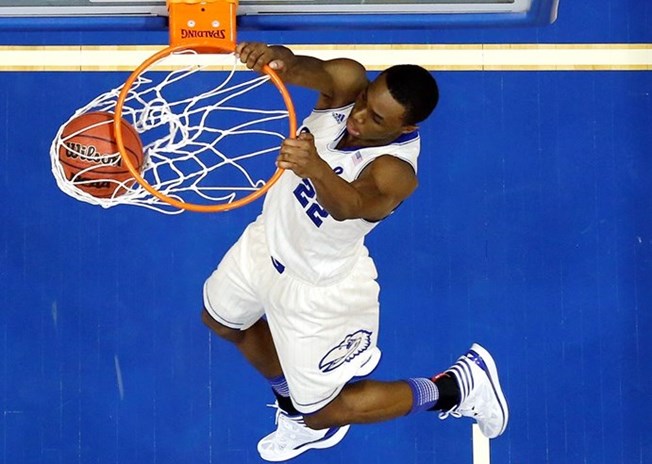 Andrew Wiggins made official on Monday what everyone has expected all season long: He is headed to the NBA Draft. “At end of the day, I decided I will enter the draft. It wasn’t an easy decision,” Wiggins said at a news conference, according to the Kansas City Star. “I wish I had more time, time goes so fast. I wish I had all four years.” The 6-foot-8 Canadian is projected as the No. 1 pick in the Draft by DraftExpress.com and could become the second straight Canadian taken No. 1 overall following Anthony Bennett last season. “This is a happy day … The time is right for Andrew,” Kansas coach Bill Self said. “Opportunity is knocking on the door. “He was so coachable, a great teammate … as good as he was for us, he’s only scratching the surface of what he can do.” Leo Rautins, the TV analyst for the Toronto Raptors and a fellow Canadian, believes it make take 2-3 years for Wiggins to fully make an impact with a bad team in the NBA. “Andrew’s transition is a little bit different,” he told SNY.tv. “Obviously, when you’re playing up front it’s a little bit different [than guards] and his body, too. I think that when he fills out, he may have the best body of any of these guys. When you’re mom’s an Olympic track star and your old man’s an NBA player, you’re doing pretty good and his body’s going to fill out and he’s going to be great. I think his transition will be little longer. He’s not going to make a LeBron impact right away but 2-3 years down the road watch out.” With Wiggins and fellow Canadian and former CIA Bounce teammate Tyler Ennis of Syracuse both having declared, Canada could have two lottery picks in the draft. If Michigan’s Nik Stauskas also declares, Canada could have three in the first round. Wiggins is the fourth one-and-done at Kansas, following Xavier Henry in 2010, Josh Selby in 2011 and Ben McLemore in 2013. 7-foot center Joel Embiid could become the fifth if he officially declares. Embiid is projected as a top-3 pick but didn’t play after March 1 because of a back injury. **For previous articles on Andrew Wiggins, click here.