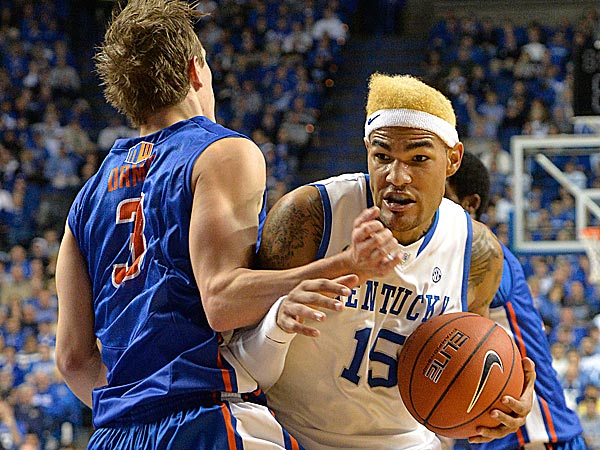 By JOSH NEWMAN Special to ZAGSBLOG When Kentucky squares off against Michigan in Sunday’s Midwest Regional final, the Wildcats may be looking for their 16th Final Four appearance without a big piece of the puzzle. Head coach John Calipari called sophomore 7-foot center Willie Cauley-Stein doubtful on Saturday for the game after the 7-foot sophomore center suffered a left ankle injury in the first half of a 74-69 come-from-behind victory over Louisville in a regional semifinal on Friday night. Even if Cauley-Stein is done for the season, that is unlikely to affect his draft stock. He is currently slotted No. 12 in June’s NBA Draft by DraftExpress. “An ankle sprain, it’s nothing,” a former NBA executive told SNY.tv. “He will be a top-20 pick regardless of him playing another college game. He could be a Lottery pick if he stayed another year at Kentucky.” “Not much,” a veteran NBA scout told SNY.tv when asked if the injury would affect his draft stock. “Everyone has seen him for two seasons and there are only a few athletic bigs.” Cauley-Stein left Lucas Oil Stadium on crutches and there was talk that it may have been an Achilles injury, but Calipari shot that down. “I will tell you, he’s still in a boot, he’s doubtful,” Calipari said on Saturday. “He’s acting like he thinks he can do something, and I would be stunned if he played in this game. But he’s saying that he may want to give it a try.  But he hasn’t been out of that boot, so he went down and hit it pretty good.” Cauley-Stein is averaging 7.0 points, 6.2 rebounds and 2.9 blocks for the season. Follow Josh Newman on Twitter

Shooting for First Title Since 2000, Big Ten Has 3 Teams Left