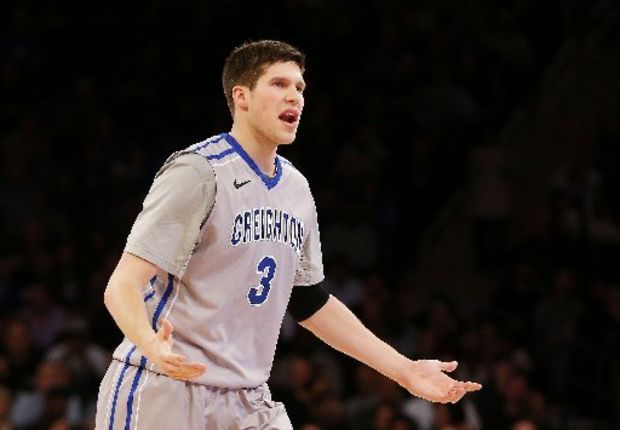 NEW YORK — In a battle of the two top players in the new-look Big East, Bryce Cotton got the better of Doug McDermott. Dougie McBuckets didn’t cut down the nets in the first Big East championship in the post-Syracuse/UConn/Louisville world. Instead it was Cotton who wore the Madison Square Garden net around his neck into the post-game presser. But as disappointed as McDermott was, he still believes his Creighton team has greatness left this season and that a Final Four is within their grasp. “As we talked in the locker room after the game, I think the highlight of our season is yet to come,” McDermott said after going for 27 points and 5 rebounds in Creighton’s 65-58 loss to the Friars. “As much as it stings right now, the best is yet to come for us.” ESPN’s Joe Lunardi had Creighton (26-7) as a 3 seed heading into Selection Sunday. Wherever Creighton lands, McDermott and his teammates will be a handful for their opponents. McDermott scored 95 points in three games in New York, just one shy of the three-game record of 96 set by Allen Iverson. “In my opinion, [McDermott] is the best player in college basketball,” Providence coach Ed Cooley said. “He is an amazing, amazing player.” And McDermott will be especially motivated now after losing to Providence, which was led by Cotton’s 23 points en route to Most Outstanding Player honors. “Huge motivation, you know I think it’s what we needed,” McDermott told SNY.tv. “Obviously we wanted to win but now we’ll have that urgency in practice all week where we know we gotta get better and we’re excited.” A senior now ranked No. 5 on the all-time college scoring list, McDermott has envisioned reaching a Final Four since he was a kid growing up in Iowa. “Yeah, that’s what  I’ve been trying to envision all season,” he said. “I just think of those  moments. I want to be great. I want to finish this deal off right.” What would it mean to get to Final Four? “It would be unbelievable,” he said. “That’s been my dream my whole life. I know it’s been my dad’s dream my whole life so it’s something we definitely want to accomplish.”

Pitino: 'We'll probably be a one seed'