Pitino Feels a ‘Void’ Not Being at Big East Tourney 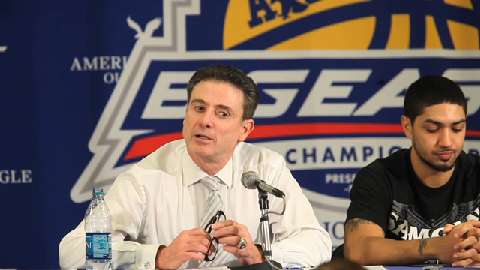 NEW YORK — In the last Big East Tournament to include original members Syracuse and UConn, it was a former Conference USA team that won the championship but left the nets hanging inside Madison Square Garden. Rick Pitino’s Louisville team stormed back from a 16-point second-half deficit against Jim Boeheim’s Syracuse club and ended up crushing the Orange, 78-61. The Big East as we knew it died that night, at 10:52 p.m. EST on March 17, 2013. Amid the excitement of the evening, Pitino instructed his players to leave the nets at the Garden up, and instead aim to cut them down in Atlanta. And three weeks later Pitino’s intended self-fulfilling prophecy came true when the Cardinals cut down the nets in Atlanta after beating Michigan in  the NCAA championship game and enjoying “One Shining Moment.” Now it is a year later, and Pitino won’t be in New York this week for the Big East Tournament for the first time since 2006. Instead, he’ll be in Memphis playing in the American Athletic Conference tournament. Louisville opens as the No. 2 seed there behind Cincinnati and opens play in Thursday’s quarterfinals. A year from now, Pitino be in Greensboro for the ACC Tournament — avoiding Denny’s with his buddy Boeheim. “Personally at Louisville I miss [the Big East Tournament] very much,” Pitino told SNY.tv by phone Tuesday. “But the University of Louisville is moving on to the ACC and we’re looking forward to that. “But personally, it’s a big void for me.” Coaches from Pitino’s tree are on display in New York this week. Manhattan is headed to the Big Dance under former Pitino assistant Steve Masiello, and Seton Hall, coached by former Pitino assistant Kevin Willard, takes on Butler tonight in the first round of the Big East. Boeheim, like Pitino, is also adjusting to his new postseason spot in Greensboro, having coached in New York at this time of year for four decades. “All that’s important when you play in a tournament is that they have a basketball court and an arena, and they’ve got that in Greensboro so we’re looking forward to the competition there,” Boeheim said the other day. Yes, the Jimmy and Ricky show is gone from the Big East and those days aren’t coming back. Remember at Big East Media Day in the fall of 2012 when each said the other was full of S***? Those were some good times. Back then, Syracuse had announced it was leaving for the ACC, and Pitino was saying Memphis and Temple could help make up for their departures. Yet before long, the Big East split into football and basketball leagues, and now Louisville, UConn, Memphis and Temple will all play in Memphis this week, while Syracuse will compete against the Dukes and Carolinas of the ACC. “I think it’s stranger for Syracuse and UConn than it is for us,” Pitino said of the charter members. But you can bet Pitino wishes he were in the Big Apple, too. “I still live in New York,” he said. I still have an apartment in New York so for me it’s still my home.” Just not his home this week, as the Big East moves on without him, and he without it.