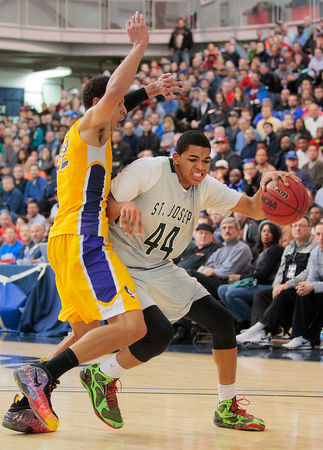 By JOHN PAVIA Special to ZAGSBLOG EDISON, N.J. — For Kentucky commit Karl-Anthony Towns, the accolades have only just begun to pile up. On Tuesday he celebrated his nomination to the McDonald’s All-American Game April 2 in Chicago at a local McDonald’s owned and operated by PJ Fonseca. The 7-foot Towns has averaged some staggering numbers on a team with two other players committed to play Division I basketball, Wade Baldwin to Vanderbilt and Raven Owen to Canisius. Towns has averaged 21.4 points, 14 rebounds, 6.5 blocks and 4.6 assists per game this season for the 26-2 Falcons, who will play Paul VI for the Non-Public A South championship Wednesday night as they look to return to the Tournament of Champions. “I feel real confident [about this game against Paul VI],” Towns told SNY.tv. “The team is playing well right now. We’ve gelled really well this whole season, especially in the showcase games we’ve had. So I feel real confident in this team not just for tomorrow, but for a TOC run. Right now, we’re playing so well and we just need to keep it up.” Towns graciously took many photos and signed autographs with supporters, fans and young kids at Tuesday’s ceremony and was very excited to be with everyone for this momentous occasion. “You know, for me, it’s been a blessing because I’ve had a lot of support my whole life to get to the point I’m at right now,” Towns said. “To always be able to give back to the community and be able to be that role model on how to get to this level. I feel happy and blessed and proud of myself for not only getting to this point of my life, but just being able to do it the way that I wanted to, on my own terms. I’m just so blessed that I have this support system and I just want to be that same support system to other kids who want to get to this level too.” He also spoke to SNY.tv about what this achievement, as well as being named to the Jordan Brand Classic on April 18 in Brooklyn, means to him as his gets closer towards the end of his high school career. “It’s just an honor and blessing,” he said. “It just shows that all the work I’ve been able to put in, people have seen. There’s nothing better in the work than knowing that you’re respected for all the work that you put in. I’m very blessed and honored to have myself represent McDonald’s and the Jordan brand and to be able to participate in two great all-star games.” With these two great achievements now under his belt, Towns still is not looking to far ahead and his main goal is still a deep run in the Tournament of Champions. “For me, I just need to play with a lot of intensity and just play the game I know how to play,” he said. “If I do that, then we have a great chance of winning the TOC. That’s just the thing, I need to go out there and play the game that I’ve been playing for 13 years or so. I just need to use all that knowledge and experience and use the skills I’ve developed in every game I play right now with a lot of energy. If I do that, then we have a great chance of winning.” Towns has still watched Kentucky “very closely” as the year has progressed and offered his thoughts on their struggles so far. “I just think it’s freshmen pains right now,” Towns said. “It was fortunate enough for Coach Cal to have Anthony Davis, Michael Kidd-Gilchrist and some seniors to the point where freshmen pains weren’t so bad. Right now I just think it’s two young teams in a row and they’re just trying to gel, find each other’s tendencies and consistencies with one another. I think that right now Cal has them on a better track and I think that they’re going to have a great run in the NCAA Tournament.” The intriguing element to next year’s Kentucky team is who will be staying and who will be leaving for the NBA Draft, a subject that has been broached before to Towns and many others. “I just think that’d be an even greater support for us if any of them were to stay,” Towns said. “We’d have experience from years of playing together. Them having played at Kentucky for a year or for some of them, two or three years. It’s going to be a big help for us because we’ll have that experience. We’ll know how to handle college life and also how to keep the freshmen pains to a minimum. So that’s a big help especially for me, Trey Lyles, Devin Booker and Tyler Ulis. We’re really just going to go in there and do the best we can. If we have the support like that, it’s going to make the world a lot easier for us.” Speaking of Kentucky’s recruiting class, Towns was asked about any potential national championship talk between him and the other three Kentucky recruits, whom he speaks with “a lot.” “We, right now, just talk about trying to win our state titles or our respective titles in our states,” he said. “That’s the biggest thing right now for us. We’re just trying to make sure we become the best players we can be and get as much success out of these last high school days. We just really worry about that. We’ll worry about the Kentucky team when we’re there. We’ll be working out there and then we’ll have to worry about new goals and new challenges, but right now, we’re just worried about high school.” Follow John on Twitter